It’s not uncommon to read in travel articles, blogs, and travel company websites that El Teide is snow-capped all year round. It isn’t. Writers often use online sources for information and once someone gets it wrong there can be a domino effect with the same misinformation appearing over and over again. For years the belief Planet of the Apes and Star Wars were filmed on Tenerife was a classic example of the misinformation drip feed. Neither were filmed on the island. 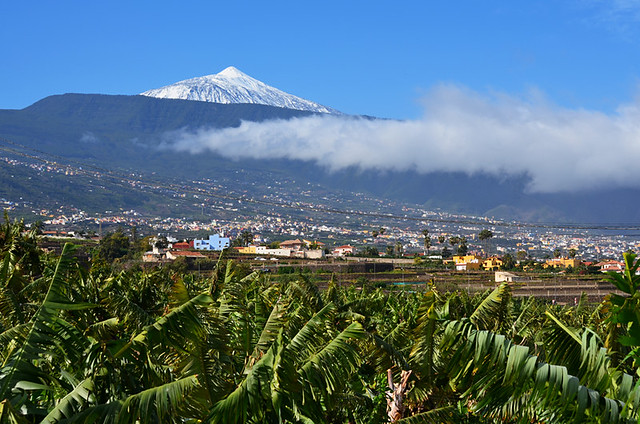 When it comes snow on Teide, the answer to my initial question might surprise some folk. The perception of what’s going on up the mountain can be shaped by where on the island you happen to be viewing it from. When the mountain’s bulk dominates your view for fourteen years, you tend to know exactly what’s happening up there.

Snow usually makes its first appearance on Teide’s slopes sometime in October. Sometimes not. It’s not normally heavy at that time of year. This photo was from October 2016. 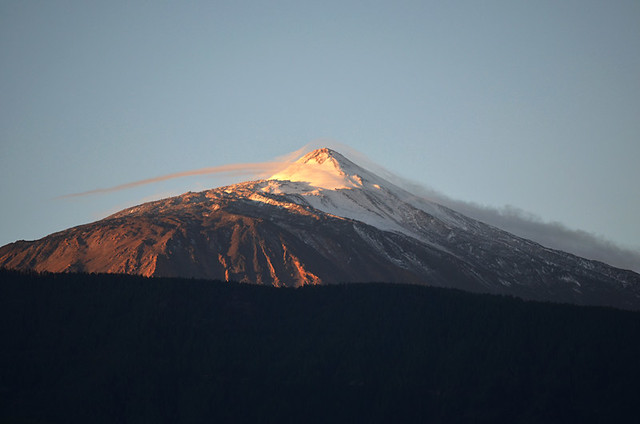 As the snow isn’t usually heavy, it doesn’t last long, coming and going during the final months of the year. This was November 2014. 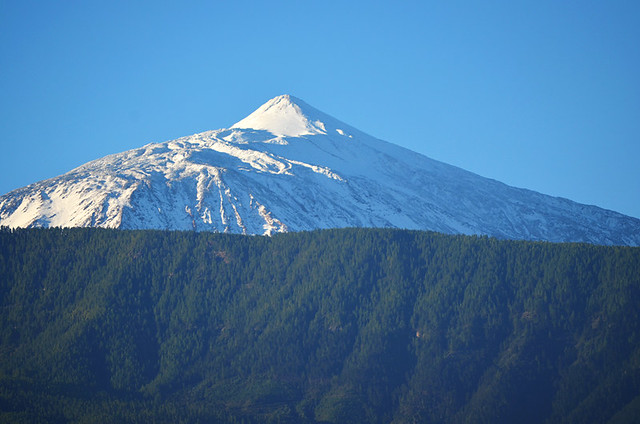 Although there’s always a chance of a white Christmas on Tenerife, December isn’t generally quite settled and sunny month which doesn’t have the sort of weather which brings serious snow, so much the same scenes as the previous two months. This was December 2016. 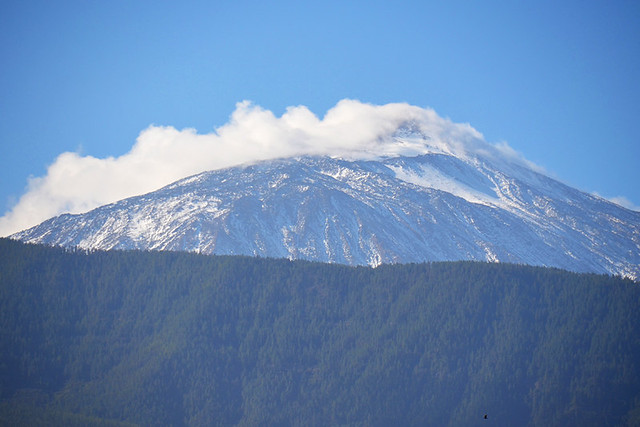 It’s post-Christmas when temperatures drop and there’s more of a chance of heavy snowfall on the mountain, although January doesn’t usually see an excessive amount of the white stuff. The photo below was from Jan 2017. 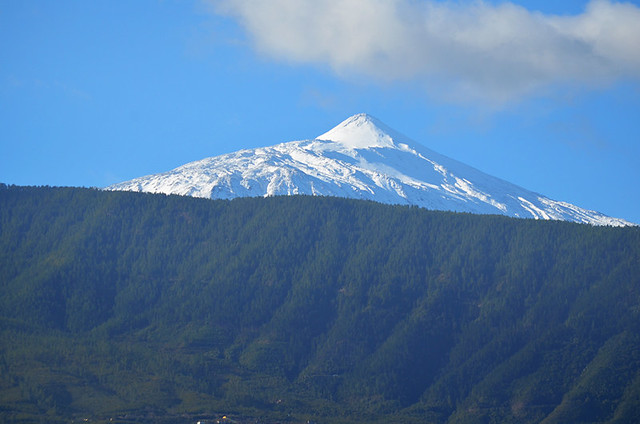 February and now we’re talking. Blizzards, icy roads, and a lot of snowy fun in Teide National Park usually happens at some point in February. The image is from Feb 2009. We wanted to experience what it was like in the park when the snow was fresh. The answer was absolutely manic. 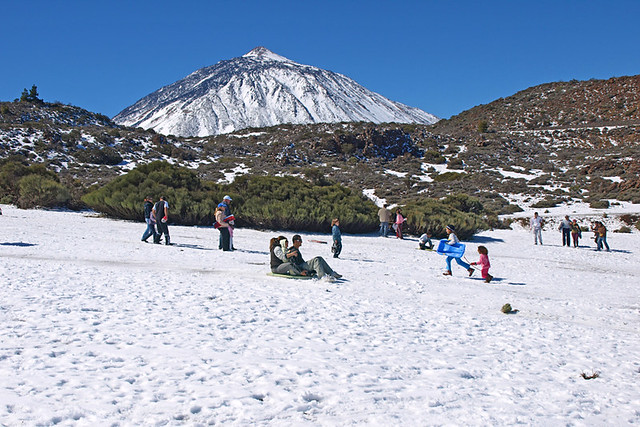 March is another month when the Spanish news will probably have reports about drivers being trapped in snowy blizzards in Teide National Park. It nearly happened to us in 2013 as we tried to skirt the worst of the snowfall to get to a meeting. We had to turn back. The image is from a couple of days after that attempt, when much of the heaviest snow had already melted. 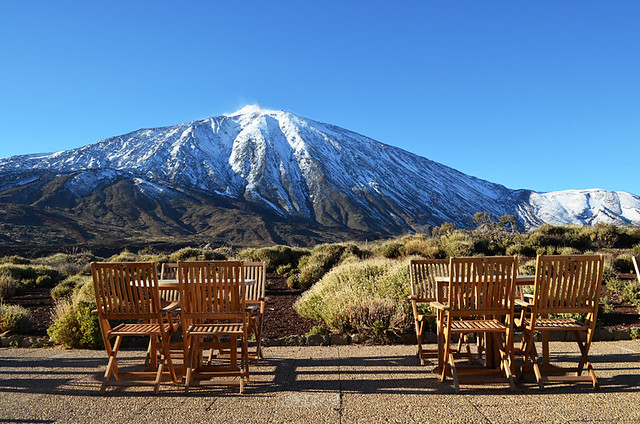 Because there’s often heavy snow in March, it can linger on into April. The photo is from late April 2015 by which time there wasn’t much white stuff left at all. 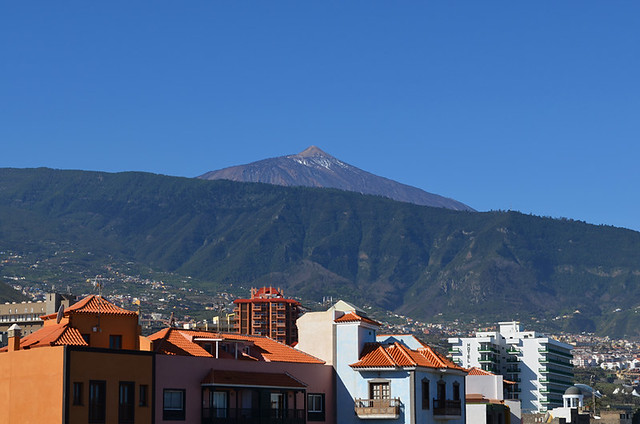 And then there’s May. Yes, you get snow on Tenerife in May… occasionally. In 2011 (when the photo was taken) it was so heavy it reached as low as the cumbre, the island’s spine. The Spanish Meteorological Office described it as being like winter, reporting it was surprising as snow doesn’t usually fall in May, but that is wasn’t without precedent. 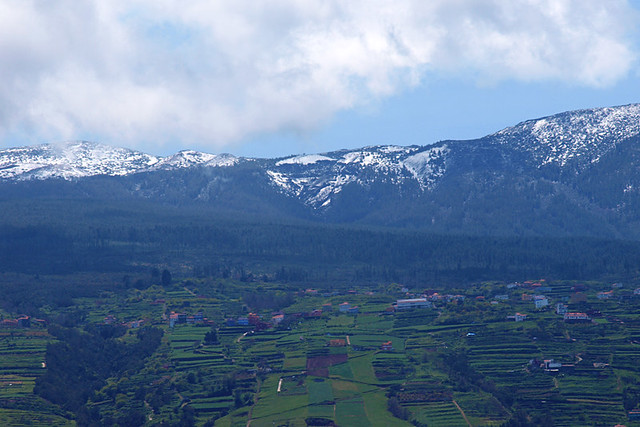 Although I can’t find a photo I’m sure the same year there were still some remnants of snow left by the start of June.

Teide might not be snow-capped 12 months of the year, but it can have snow on at some point for 7 months and at a rare push even 8 or 9.