The title should really read ‘our ten favourite viewpoints on Tenerife you can reach by car’ but that would have been far too long.

Our truly favourite places to stand, hands on hips, wallowing in epic views tend to involve a bit of a trek on foot so maybe that’s one for another day.

There is a wonderful network of miradores across Tenerife. These are specially constructed viewpoints which open up the landscape and wow scenery to anyone who goes exploring on four wheels. Some of these are on coach excursion routes, so not being able to drive doesn’t mean you have to completely miss out. However, many are off the excursion trail. 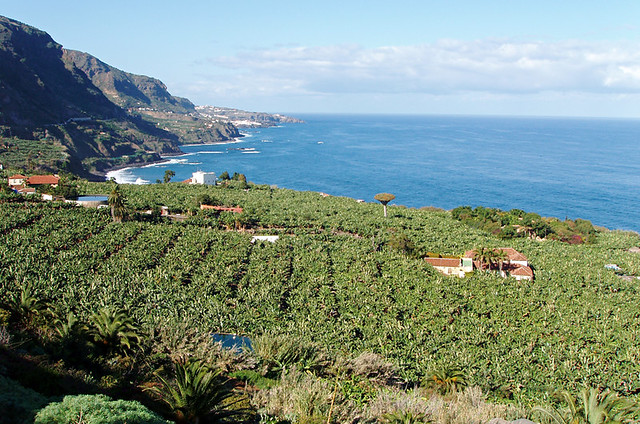 As well as having views of our favourite section of Tenerife’s coastline, the San Pedro viewpoint just off the Puerto de la Cruz to Icod de los Vinos coastal road (TF5) is also a starting point for walks and a spot where locals gather to enjoy sunset from the terrace of the restaurant located there. 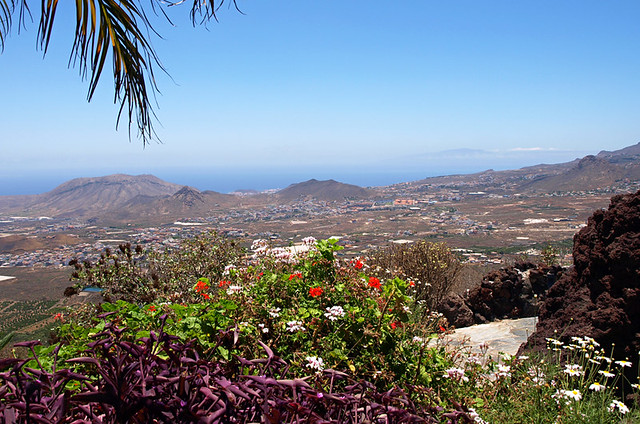 Maybe not the most spectacular of views in the mirador network but the vistas over the southern landscape from La Centinela (on the TF28 between Arona and San Miguel) is fascinating, you can see the land is pockmarked with volcanic cones. It’s attractively landscaped and there’s a restaurant with panoramic views. 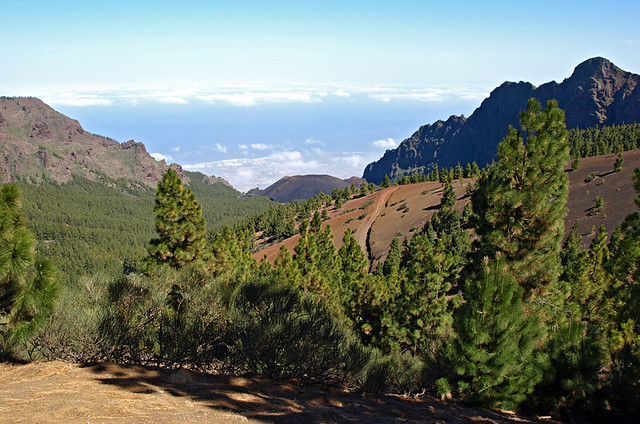 Not an easy one to get to from anywhere as it lies on the TF24 running along the island’s spine from La Laguna to Teide National Park. There’s limited parking, which keeps the big buses away and leaves you crowd-free to enjoy views over the east coast, the Caldera de Pedro Gil and the Arafo volcano which erupted in 1705. 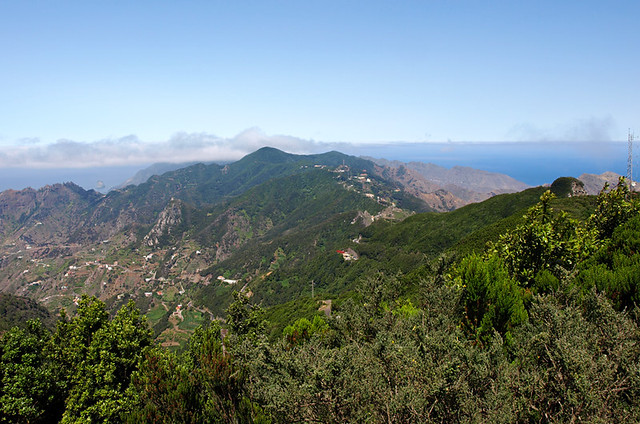 One of the most spectacular Tenerife viewpoints… on a clear day. We’ve heard all sorts of stories about why this mirador just off the TF114 got its name and the true origins are debatable, but what is a fact is the views across Anaga in one direction and to Mount Teide in the other are quite special. 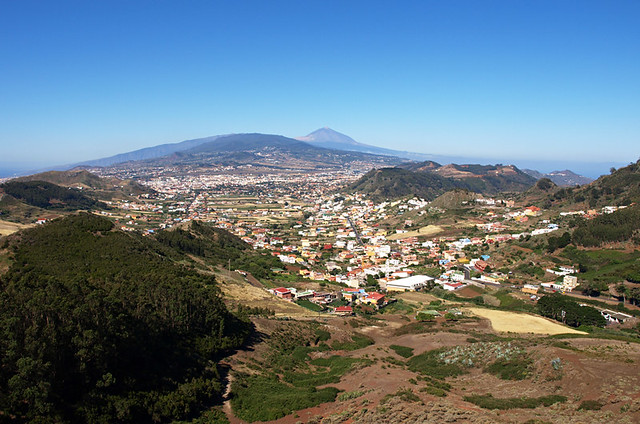 I particularly like the Jardina viewpoint on the TF12 as it shows just how expansive a plain the Aguere Valley is. In the distance is La Laguna, Tenerife Norte Airport and Mount Teide. 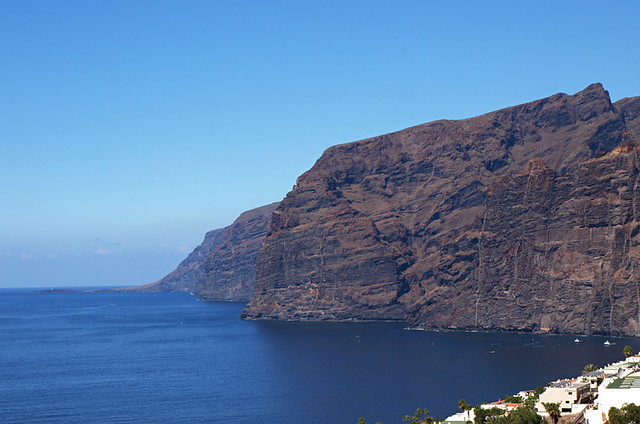 Any time I need to update photos of the Los Gigantes cliffs I stop at the Archipenque viewpoint on the TF454 road into Puerto Santiago. There’s a convenient little café from which to enjoy the ‘Giants’ over a drink. 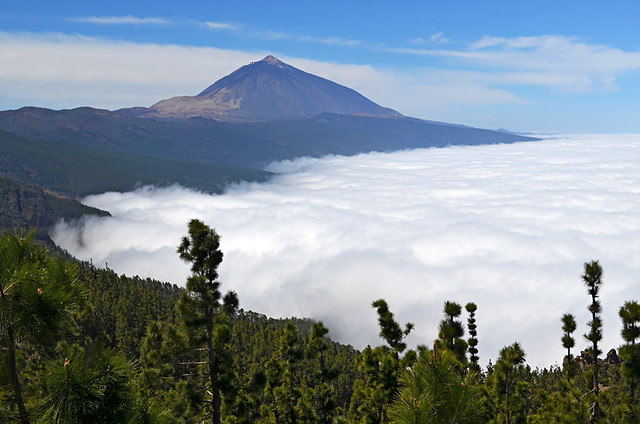 Another viewpoint on the TF24 that takes a bit of effort to get to. But the rewards are beautiful views across the Orotava Valley pine forest to Mount Teide. If you’re lucky,  you get the sea of clouds as a bonus. 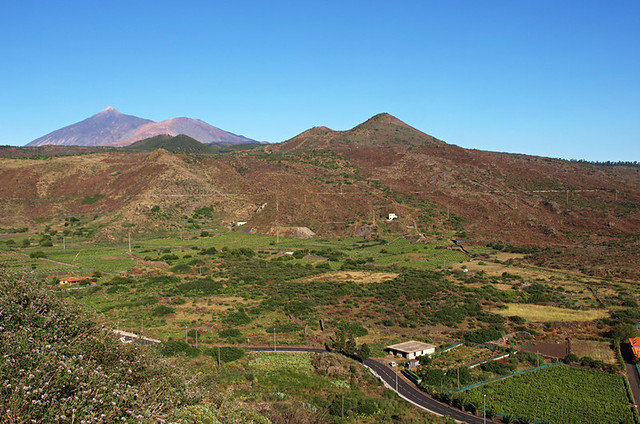 This lay-by on the TF82 between Santiago del Teide and Icod de los Vinos isn’t on the official list of miradores but it does have a pretty impressive view of Mount Teide and Pico Viejo as well as the sunny Valle de Santiago. Always worth a stop. 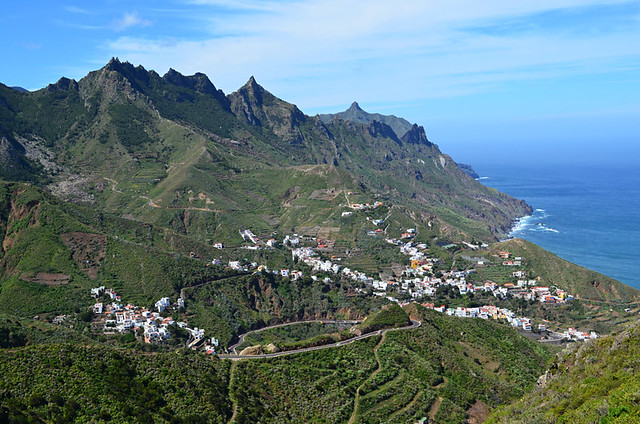 There aren’t many places to pause on Anaga’s narrow, twisting roads; however Amagoje on the TF134 is big enough to take coaches and a couple of cars. From the road you get classic views of the Anagas, Taganana and the rugged north east coast. 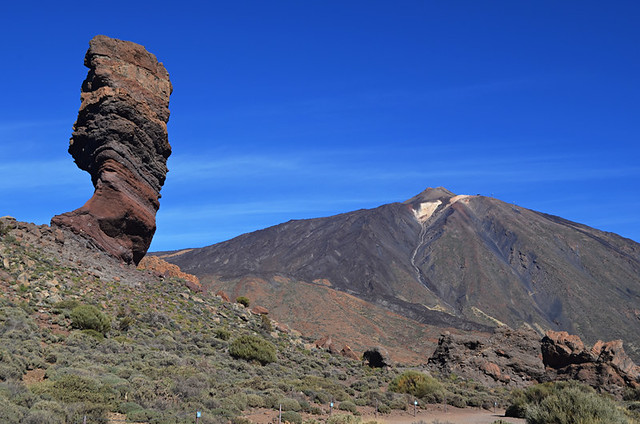 You could have any number of viewpoints in Teide National Park, all with quite different scenery to wax lyrical over. But the Roques de Garcia is one of the most visited for a reason. In one slow twirl you get Mount Teide and the distinctive Roque Cinchado (the photo everyone has to take), views across the Ucanca Plains and also to Montaña Guajara and the Parador. Like nearly every other tourist hot spot in the park, if you want to escape the crowds all you have to do is walk a few minutes along the path that circles the rocks and hey presto, no hordes.

The trouble when you start putting together a list like this is that choosing ten is almost impossible. There are loads more great viewpoints dotted around the island vying for a mention.

The Tenerife restaurants which are truly off the beaten track

When people ask about off the beaten track locations on Tenerife, they usually mean somewhere tranquil and rural, or a picturesque fishing village […]