I hold my hands up now, I don’t particularly like eating out in Playa Fañabe in Costa Adeje. That’s partly because of restaurant touts. I like to stroll, to browse menus at will without having a jabbering parrot on my shoulder pretending he’s my best friend. An overdose of over enthusiastic touts turns me off before I start. It’s not so bad on the promenade, but the streets leading away from the prom can be too in your face. 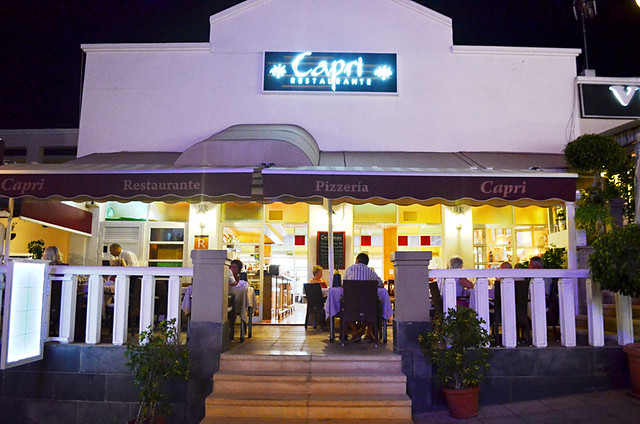 By the time we found Restaurant Capri I was already bitching like mad about having to eat in the resort.  Additionally, too many restaurants just don’t appeal, like they’ve come off a production line at the same factory with the same menu, same forgettable food and same disappointing outcome.
Sometimes in the past we’ve wandered around before, basically, settling. This time we knew where we were going. Capri was chosen because it had lots of favourable reviews and we fancied fresh pasta.

Plus point one: No tout – a relief after escaping the clutches of an exuberant guy outside of the Mexican next door.
Plus point two: An aesthetically attractive terrace, dimly and tastefully lit and filled with people. Stepping onto the terrace was like escaping into a tranquil sanctuary.
Plus point three: Friendly and efficient staff who were calm and in control even though it was busy. 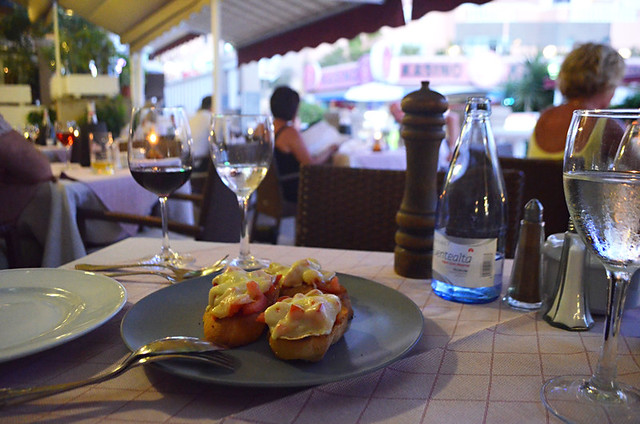 By the time we sat down, ordered some vino and had a look at the menu, I was relaxing and starting to thaw towards Fañabe. It was a nice little spot and good for people watching.

The Food at Capri
It’s an Italian restaurant so the menu unsurprisingly includes pastas, pizzas, steak and seafood dishes. One of the things we immediately liked about Capri was that there was a choice of fresh and dry pasta dishes. We ordered some garlic, tomato and cheese bread; fettuccine Capri (mushroom, cream, truffle oil and steak); tortellini prosciutto and a bottle of red.

We’re constantly disappointed by garlic breads on Tenerife and Capri’s was no exception – chunky tomato with quite tasteless melted cheese on a gum-shredding baguette. 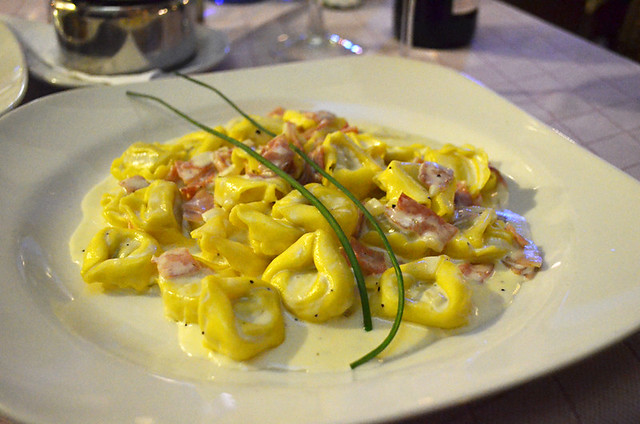 Service was quick and the main courses turned up pronto. Maybe a bit too pronto. Both were good sized and looked attractive enough. Mine was creamy, tasty and a touch on the rich side. It was enjoyable without being exceptional. Andy was less enamoured with hers although felt it had nice enough flavours but not enough steak to balance out the combination of ingredients.
We eat a lot of fresh pasta dishes and neither dish was of the same standard as others we’ve had recently. There was nothing wrong with them, they were simply just bog standard fare, and the pasta didn’t seem as fresh as other fresh pastas we’ve devoured.

I enjoyed our meal at Capri. It was an ambient atmosphere, the staff were nice and the food was decent. It was also good value with pasta dishes coming in under €10. I’d recommend Capri to anyone staying in the area as being a decent place to eat. 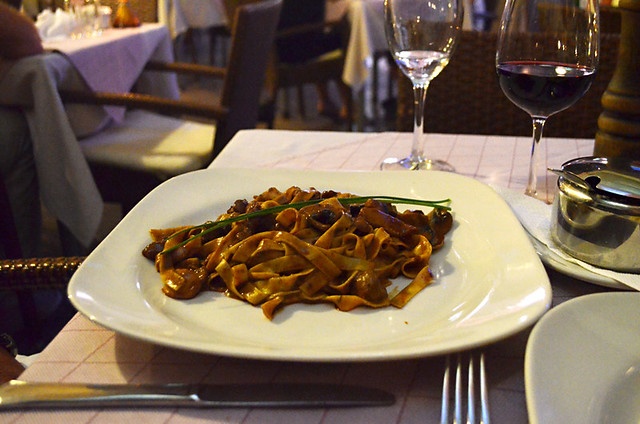 However,  in the end there was nothing particularly different about it. Just good, but run of the mill fare in a resort that seems to, on the whole, specialise in being gastronomically mundane.

Why Don’t We Agree About Food on Tenerife?

I looked at the unimaginative choice before me and my heart sank – dry looking fillets of fish, stodgy pasta, curled meat thinner than my shoe leather. […]