In checking out what was lined up for this month, we noticed that Puerto de la Cruz are having a Ruta de Tapas. Closer examination revealed a few participating restaurants that we have yet to try and so, late yesterday afternoon we gave ourselves an early work finish and headed down into town to check out what was on offer. What is a Ruta de Tapas?
For anyone not yet familiar with this culinary journey, a Ruta de Tapas consists of a number of participating bars and restaurants within a given area offering a special deal on tapa for an agreed period of time. In this case the deal is €3.50 for a tapa and a drink (a small beer, wine, water or soft drink). You pick up a ‘passport’ each from any of the participating restaurants (we got ours from the menu stand outside Pizzeria La Esquina) which will tell you which restaurants are participating, what dishes they’re offering and helpfully, their opening hours (most open at lunch time through to evening) along with their location on a map. Then set off and start tapa tasting. Make sure you get your passport stamped by every restaurant you try. Why do a Ruta de Tapas?
As a participating restaurant it’s an opportunity to showcase your culinary creativity and skills by offering tasty and good looking dishes. The chances are you’re going to attract new customers on the route and this is your chance to impress them so that they come back again for a full meal. Participants get to vote on their favourite tapas and there are gold, silver and bronze diplomas up for grabs which are good marketing tools.

Puerto de la Cruz Ruta de Tapas
There are 19 participating restaurants in this particular Ruta de Tapas and the majority are around the Ranilla District which means they’re all in easy strolling distance and close to the large, free, harbour car park.

After studying our passports we decided to try those establishments that were offering two different types of tapa so that we could try a different one each. As most of those were also places we had never tried before or had changed hands since our last visit, it was a great opportunity to discover some new places to eat. First up was Bar Café Agora on the lovely little plaza of Benito Pérez Galdos. An elegant and eclectic bar, the names of their tapas, Agoriano and Agoriano Vegetal, gave little away in terms of what they consisted of except that one was clearly the non-meat version of the other. As it turned out, they were beautiful little pastry tartlets with a Marie Rose and Balsamic vinegar sauce. The Agoriano was filled with chorizo in a creamy sauce and the Vegetal was goats cheese. The pastry was savoury and melt-in-the-mouth crumbly, the tartlets were topped with fresh, sweet tomatoes and the sauce complemented perfectly. The tapas quality bar had been set and it was going to be difficult for others to reach. Next was Restaurante Bodeguita La Reina, a traditional little restaurant on the corner of Méquinez and Cruz Verde. Last time we came here it was a Cuban bar and we hadn’t yet tried it under its not-so-new management. Again, there was nothing in the names to predict what we were going to get when we ordered one of each tapa in the competition but that’s half the fun of a Ruta de Tapas – waiting to see what emerges from the kitchen. I was disappointed at the look of my Delicias del casco antiguo when it arrived as it was essentially a slice of pâté spread with marmalade on a very small digestive biscuit. Jack on the other hand got the La reina de la Ranilla which was a puff pastry slice topped with chunks of pork and covered with a thick sauce. Although he wolfed it and clearly enjoyed it, Jack reported that the pork was tasty but the sauce was a little bland, so with two under our belts, Agora was the clear leader. The last time we went to what is now Sirimiri it was an arepa bar, now it’s a stylish Pintxos and wine restaurant set up just two months ago by a mum and daughter team from the Basque Country. Offering an extensive menu of Pintxos, typical Basque tapas held together with a ‘pintxo’ (cocktail stick or spike), two of their usual menu items were being featured – Pintxo Zarautz and Pintxo Gernika. The Pintxo Zarautz was a small skewer of succulent fillet steak dipped in what was described on the menu as a glass of ‘savoury meat sauce’ although it tasted like rich mushroom, and was exceptional. The Gernika was a small tartlet of filo pastry layered with a mixture of salt cod and aubergine on a bed of tomato sauce and was also very tasty. Served with a generous volume of the very quaffable house wine, Sirimiri had just placed itself up at joint first in my mind and was a definite ‘must’ to re-visit. Last on our first night tapas tour was Delicias de Ángeles on Mequinez, conveniently en route to the car park. This is a location that changes hands frequently for some reason but since its incarnation as Ángeles it seems to have been busier so we were keen to try it out.
Once again there were two choices on offer – Profiteroles con queso and Cesta rustica. In the looks and size department, these two were right up there with Agora’s tartlets. The Cesta rustica was an open tartlet of prawn and parmesan, topped with a shrimp and drizzled in Balsamic. The Profiterole was a light, puff pastry sandwich filled with goat cheese and tomato sauce and again, drizzled with Balsamic. Both dishes were very tasty and good value for money but in taste terms, Agora and Sirimiri are still holding pole position for me. 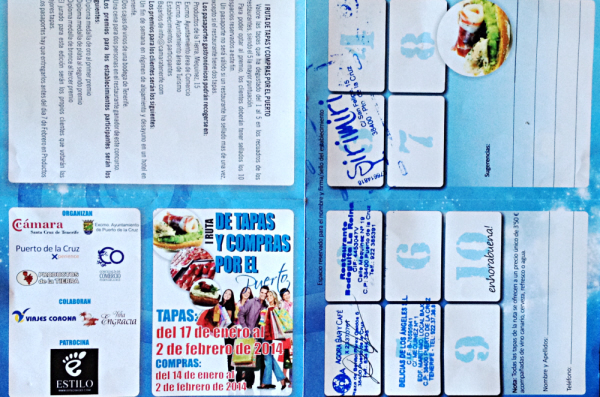 We had enjoyed eight different tapas dishes between us, along with three glasses of wine and a small beer each (Jack drank most of my drinks as I was driving); we had tried four new restaurants and at least one of us was slightly tipsy, all for the princely sum of €28 in total.
Apart from having an extremely enjoyable evening, we have discovered at least two restaurants that we will definitely go back and enjoy a full meal in. All in all, a resounding success and we have our passports to hand, ready for the next tour and to make our final decision on who we’re going to vote for.

The Puerto de la Cruz Ruta de Tapas runs until 2nd February 2014. If you try it, let us know which your favourites are.