Has the best sunset I’ve ever seen been on Tenerife? No, it hasn’t.

I grew up on an island off the west coast of Scotland where we enjoyed spectacularly flamboyant sunsets with rolling hills and beautifully wild beaches included in the frame.

I’ve also seen some sunsets in other parts of the world that were so beautiful they made my heart ache.

That’s not to say Tenerife doesn’t get its fair share of stunning and diverse sunsets. But not all the island is blessed with a decent show at sundown.

Sunset in Santa Cruz in the east of the island is generally a bit of a damp squib, it just gets dark. Further south west or north west is where you want to be to bask in the last exuberant glows before the golden orb slips below the surface of the sea, or ducks behind a neighbouring island.

The south west coast is particularly good for sunset watchers. This view was from Alcalá, more specifically the Gran Melia Palacio de Isora where the huge infinity pool adds an exotic and luxurious touch and La Gomera, just about seen in the distance in this shot, breaks up the horizon. 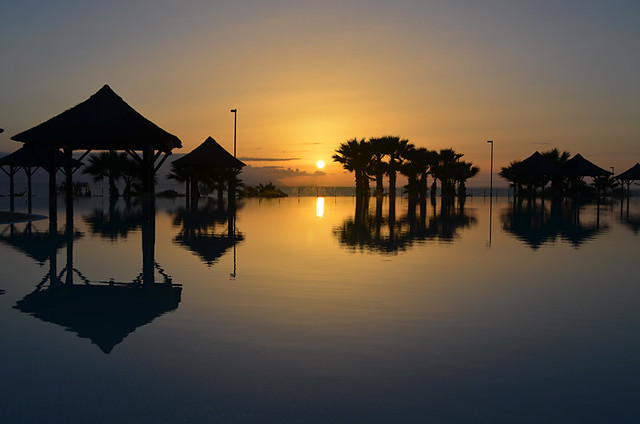 Sometimes there’s no rainbow spread of colours across the sky, just a two tone contrast between a golden sky and an increasingly petrol blue sea. It’s the sort of sunset which people sail off into in the movies. As it happens there is actually a sailing ship on the horizon in this photo taken from Costa Adeje. 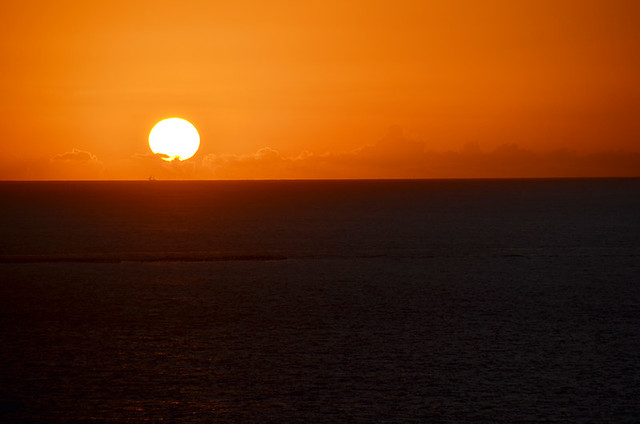 This sunset from a hotel in Playa Paraiso wasn’t particularly colourful, but after a cool February day where the cloud kept the sun at bay it was a welcome and rather dramatic sight when it slipped below the bank of clouds hugging the coastline. 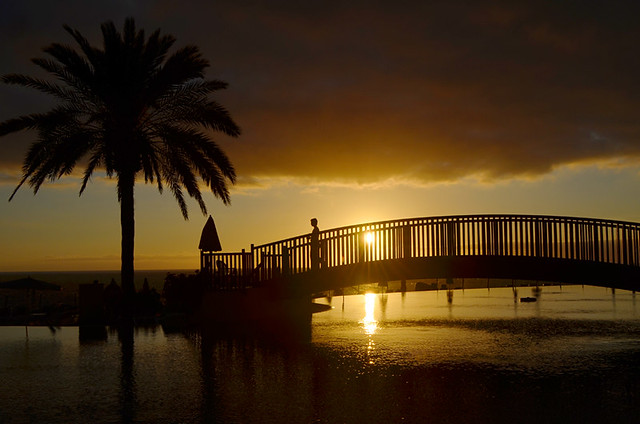 You might think staying at the Parador in Teide National Park would reward with a sensational sunset view on Mount Teide. But you’re on the wrong side of the mountain, sunrise is far more of a show on the volcano’s slopes. On the other hand, what you can get is something quite different and appropriately other worldly. On this occasion in April a fiery sky made the silhouettes of the Roques de Garcia quite mythical and noble looking. 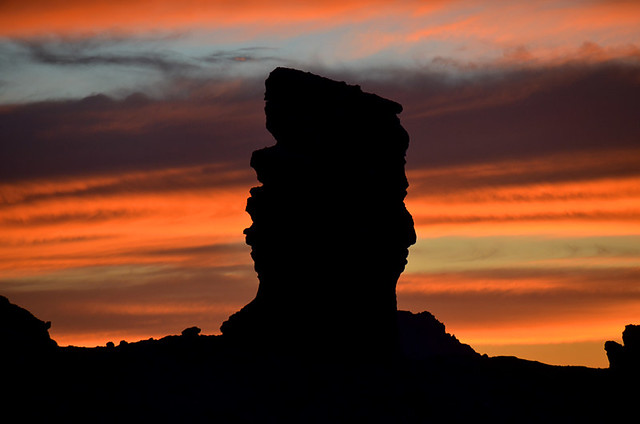 What Tenerife also offers is the chance to witness something rather special, sunset above the clouds. This was taken on a November day when there was an orange weather alert for an approaching storm. We sat hypnotised as the storm clouds rolled across the south of the island below us, basking not so much in the calm before the storm but the calm above it. 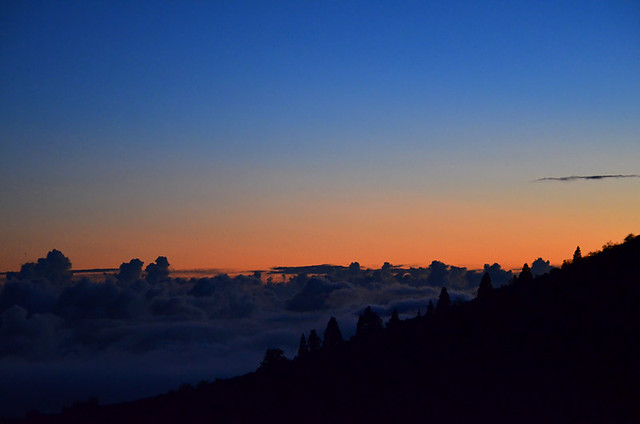 The golden port. One of the nicest sunset scenes in my view is at Playa Jardín in Puerto de la Cruz where a few sunset worshippers gather on the sands to be hypnotised and there’s the additional bonus of the setting sun lighting up the huge Atlantic rollers. This particular sundown at the garden beach was in February. 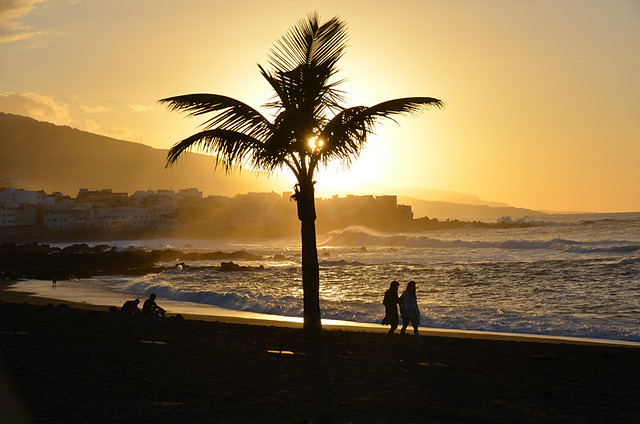 Puerto de la Cruz has had a reputation for golden sunsets which dates back centuries, but as Teide lies between the town and the west, the departing sun doesn’t light up the side of the mountain facing the town. However, when there’s something weird weather-wise going on around Teide’s peak you can be treated to a surreal show. In this case it was the unusual sight of a double sombrero (hat), a sure sign of wild weather on high. This was taken in November, a time when the weather is at its most unpredictable. 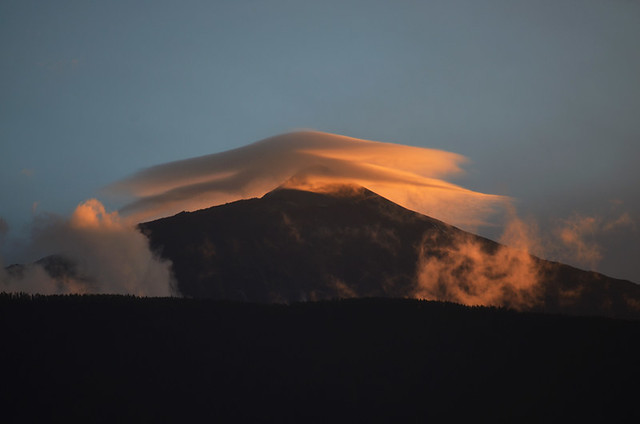 Although looking towards Teide from the Orotava Valley is unlikely to reward with a memorable sunset, looking in the other direction might. When the sun drops, the sky to the east above Santa Ursula is often an intense shade and the hills are bathed in rich golden hues; occasionally you get something like this. 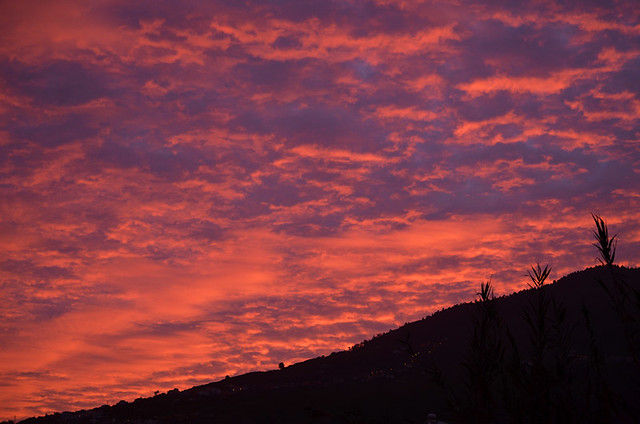 Some sunsets are Wagnerian – bold and dramatic, vibrant Valkyries streaking across the sky. Others are more Vivaldi, all soft pastel colours dancing in the heavens. In some ways the Vivaldi sunsets are the most magical, especially when little El Hierro makes an appearance (just to the left of La Gomera). 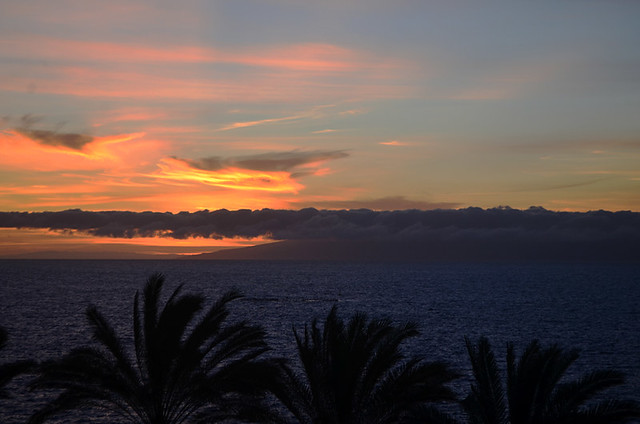 Apart from the Alcalá photo, which was September, all the sunset shots featured were taken between November and April, probably the best period for experiencing the most dramatic Tenerife sunsets.

Have You Tried Papas Locas on Tenerife?

Papas locas – crazy chips. Why are they crazy? If you’ve tried them you’ll know why. When the plate appears it looks like a disaster zone, or a Jackson Pollock… […]