The mountain dominates Teide National Park. It dominates much of Tenerife, in fact it dominates the Canary Islands. The scene which brings people to a halt on islands like La Gomera and Gran Canaria is as likely to be Tenerife’s Mount Teide lording it over the archipelago as it is to be some home grown beauty spot.

It’s the undisputed star of the scenic show. Spain’s highest mountain draws modern day pilgrims (aka tourists) to worship on its slopes (i.e. take selfies and post them on facebook). Being surrounded by a manic volcanic landscape only adds to its unique beauty whilst being a slumbering volcano lends it that dangerous yet irresistible bad boy element.

But turn the camera away from Mount Teide and there’s a huge volcanic world full of  magic, wonder and rock formations formed when M. Nature was clearly on drugs.

Some of these worlds can be viewed without a lot of effort, i.e. park the car, get out, take a picture, get back in car and drive off. Others require a bit more physical input, some of it of the lung-busting, muscle-screaming kind. Easy or difficult to get to, both types have the same thing in common, in over 10 years of living on Tenerife they’ve never lost their impact to stop us in our tracks. 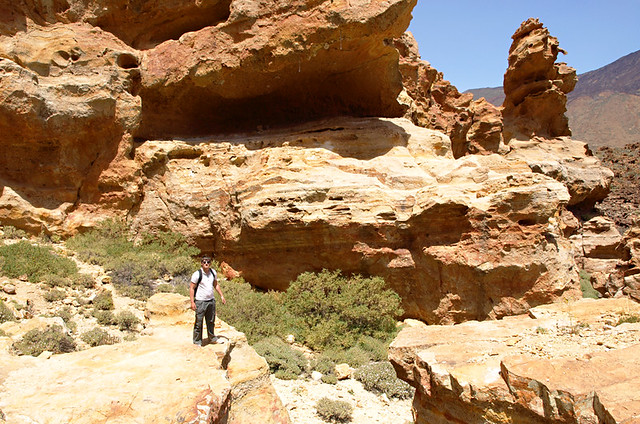 El Capricho
Not far from the Parador de Cañadas are a series of jagged rocks which are popular with rock climbers. From the path it’s impossible to see their peaked forms hide a mini labyrinth of cavities and caves. There’s a slightly mysterious air to this area, I don’t know why but I get a slightly nervy feeling whenever I wander too close. Best time to view them is as the sun drops making the rock vibrantly orange against an intensely deep blue sky. 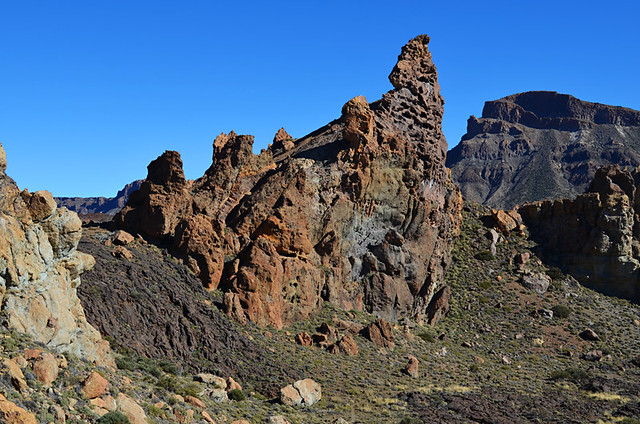 Roques de Garcia
The Roques fall into both the ‘easy to see’ and ‘takes a bit of effort’ categories. On the one hand, everyone who sets foot in Teide National Park has stopped in the car park beside the one other feature that usually makes it onto many photographs, Roque Cinchado. But the Roques are so much more than one rock framed against El Teide. Delve deeper using the path leading from the car park and they will reveal more twisted and bizarre sights, including a solidified lava waterfall. 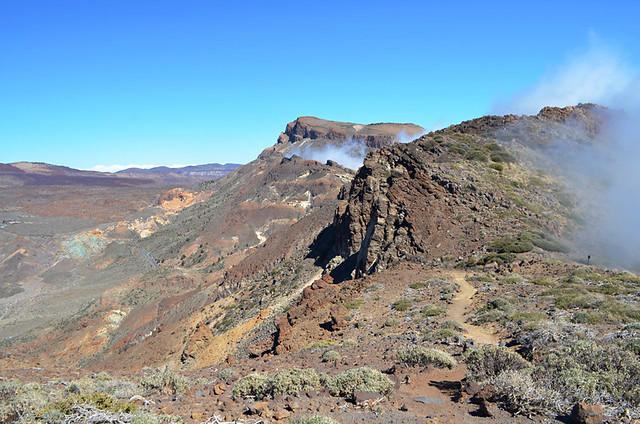 View From the Rim
One of the most challenging walking routes on Tenerife we’ve tackled involved climbing to the rim of the crater which shields the park on its southern side. We thought getting there would be the hard part; it was only half the pain. The crater rim undulates dramatically and there are some sections which mock your senses with optical illusions which require slight leaps of faith when it looks as though paths fall off the edge of the world. 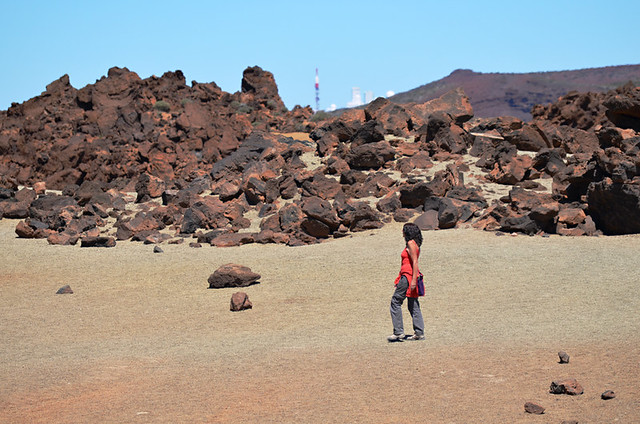 Minas de San José
An easy one to get to and one of my favourite areas of the whole park. The landscape is softer and more seductive at the Minas de San José where the curves in the coppery blue volcanic sand could be described as being voluptuous. It’s one of the most other-worldly areas in the park. 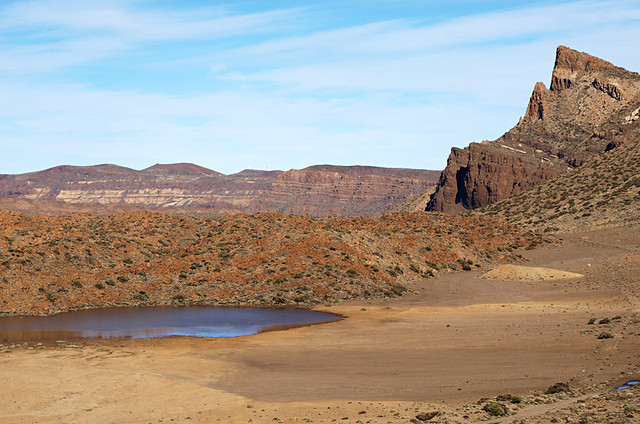 The Lakes of Siete Cañadas
Given the thirsty, nearly always sunny, climate in Teide National Park the existence of mini lakes is all the more freaky. They’re not there all the time, but wander the trail when the winter snows have thawed and you might just get lucky. 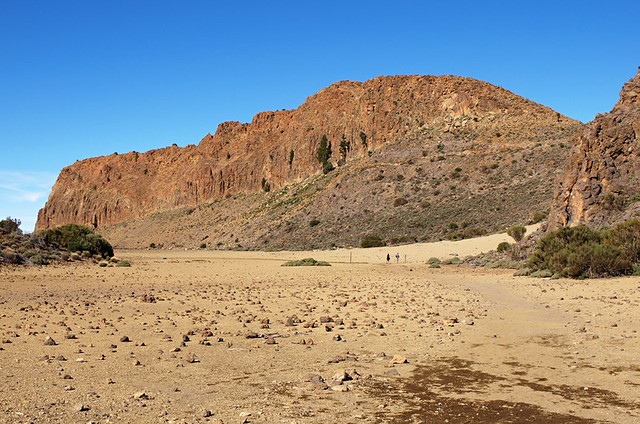 Plains and Fortress Walls
Where Mount Teide looms huge in the centre of Tenerife, making all around it seem small, the area below La Fortaleza to the north of the mountain puts the sheer scale of parts of the rest of the park into perspective. The wall of rock above a sandy plain might seem small when compared to Teide trying to muscle in on the scene. But when you spot ant people at its base, you realise just how immense this weird landscape really is. 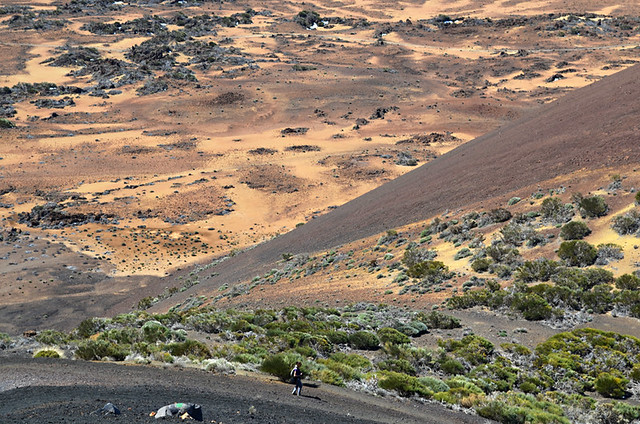 A World of Colours
Every so often you come across a scene in Teide National Park which reveals exactly why the alfombristas (carpet makers) of La Orotava can create such vivid images just by using sand and soil from the park. The part of the park between Izaña and El Portillo is one such area. The view when you come slip sliding down black sand slopes is one of my all time favourites in the crater. 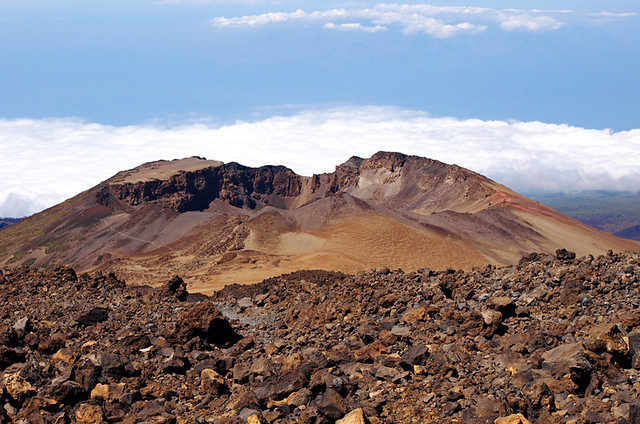 Pico Viejo
On the face of it the walk from the upper cable car station to the viewpoint overlooking the rugged yawning mouth of Pico Viejo isn’t a long one, but at 3500m above sea level the breath is easily stolen from your lungs by invisible mountain elves. The upside is a high percentage of the masses who make the cable car journey don’t bother walking all the way, which keeps one of the most humbling vistas in the Canary Islands on the exclusive side of things. 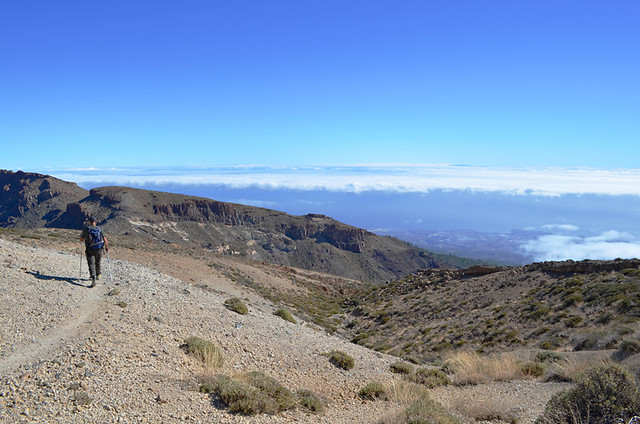 A Mighty Mount in any other World
Montaña Guajara looks like nothing when compared with its limelight-hogging bigger brother across the volcanic wilderness. But climb to its summit and you’ll quickly discover this is no tame midget of a mountain. The summit of Guajara is THE place to sit and contemplate the curves, crevices and swirling volcanic cascades of the World’s third largest volcano. Contrast these with the views down to the south coast. 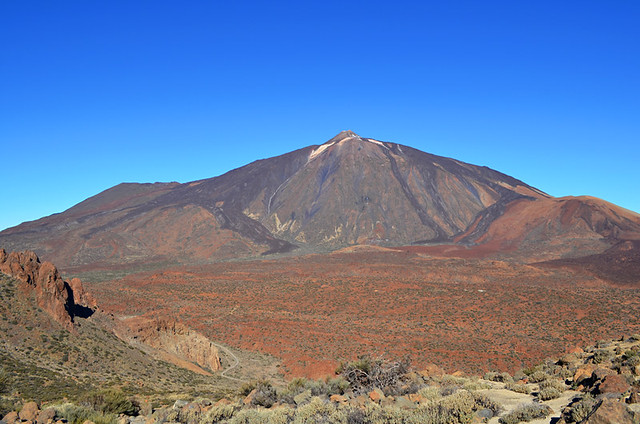 Most of the areas of the park mentioned are included in our Walk This Way Tenerife guidebook and in our Hiking Highs set of PDF walking routes.