Our nephew Liam stayed with us over the last week. Ever since he was a toddler we’ve always put together programmes for his VIP visits. In the UK he actually lived next door, but still came for weekend stays.

Now he’s twenty five things haven’t changed, so a programme was compiled. In many ways it was designed so he would have mostly new Tenerife experiences as well as a couple of old favourites (Mount Teide is an essential ingredient). It wasn’t deliberate, more circumstantial, but many of the things we planned involved food. Looking back I realise the culinary agenda we put together covered quite a diverse range of cheap local eating, but not the sort of cheap eating that sacrificed quality. 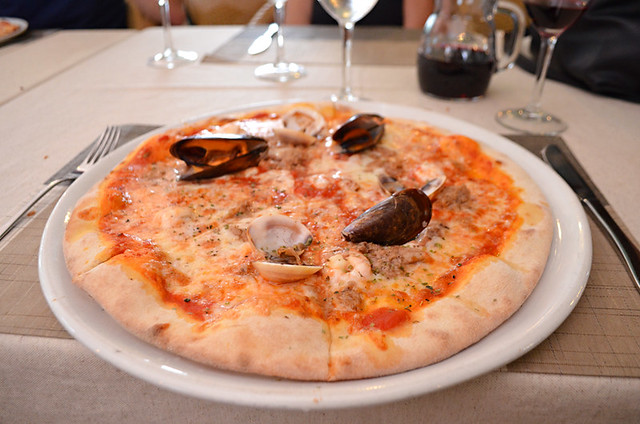 As it was one of the semi-final World Cup games, a quick jaunt to La Paz in Puerto de la Cruz for a pizza seemed the ideal way to fit in dinner before kick off. We’d been impressed with Da Arianna before and it didn’t let us down. If anything, the pizzas were too big and we groaned our way through the Netherlands v Argentina game, thanks to a mix of stuffed stomachs and poor football. 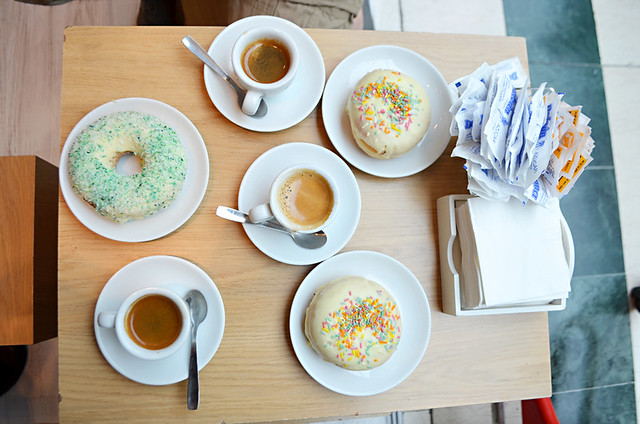 Stocking up on shopping at La Villa in La Orotava gave us the perfect excuse for arepas, Venezuelan stuffed, fried and filled corn pancakes (excellent cheap street food) at La Esquina followed by creatively sweet doughnuts and a coffee at Öko. Total combined came in at under €20. 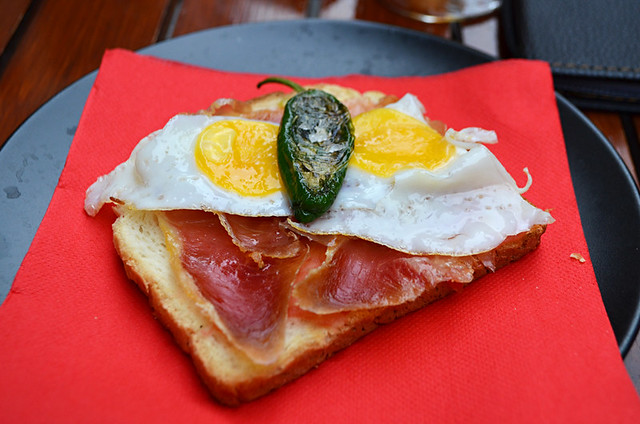 A mini tapas route in Puerto de la Cruz meant we could test a couple of bars we hadn’t been to before and munch some creative tapas at the same time. Spinach croquettes (Guachinche El Tanganaso); montaditos with bacon, goat’s cheese and apricot jam (La Vola); pan amb tomate with Serrano ham, quail eggs and pimiento de padron (La Ventita); montaditos with guacamole and boquerones (Mil Sabores) and finally papas arrugadas with marinated fish (El Bistro de Antonio Aguiar). Each was €2.50 with a bottle of beer. The tapas was finished off with a poke of churros from a churreria van at the funfair beside the harbour. 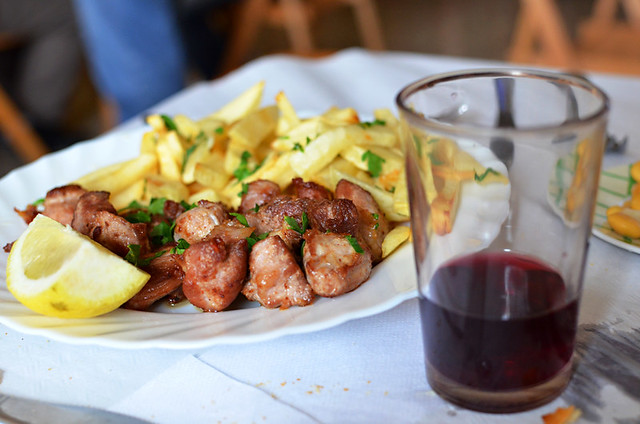 A guachinche hunt paid off with an atmospheric lunch in a converted garage full of local farmers in the hills between La Orotava and Los Realejos. Two plates of carne fiesta (spiced pork) and one of cabra (goat) with a half litre of the owner’s wine came to under €20. 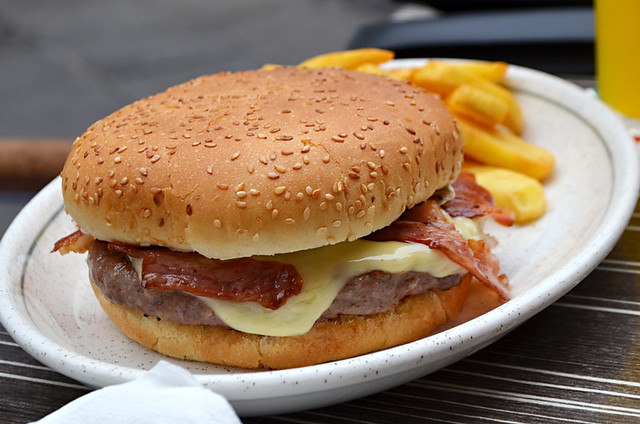 A long walk in a very hot Teide National Park was rewarded with three different gourmet burgers at Gulliver’s in Puerto de la Cruz, each coming in at under €6. 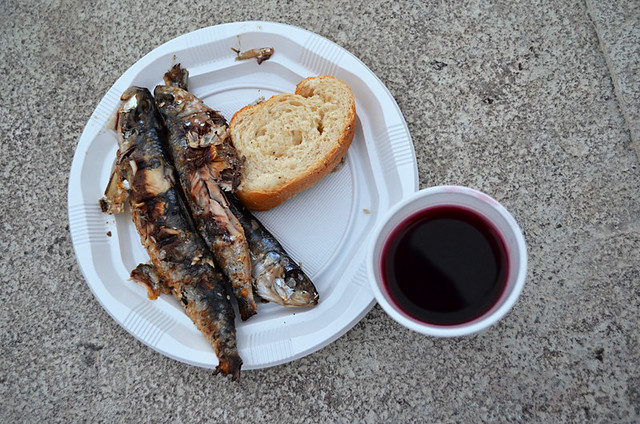 The ‘Sardinada’ in Puerto de la Cruz traditionally takes place the night before the big fiesta day, Día de la Embarcación. Live music, a wonderful atmosphere and a plate of four fresh sardines with a cup of wine for €3.50. 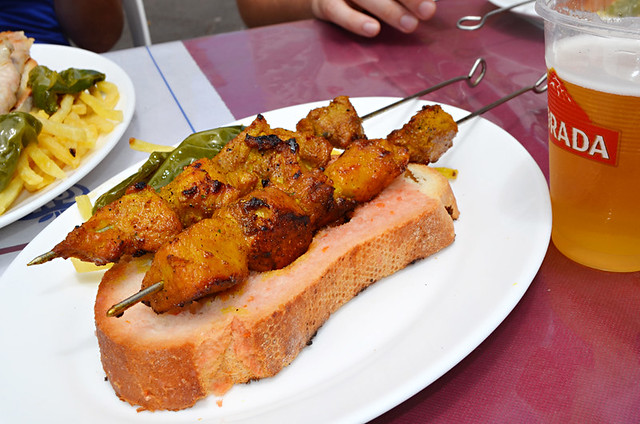 Día de la Embarcación in Puerto de la Cruz. It’s the done thing to eat pinchos morunos (spicy pork kebabs) at fiestas. We went for a posh version, catalanas from the Maison California kiosk. At €9 a catalana (some are cheaper), they were probably the most expensive single food item we paid for all week… but they were worth it. 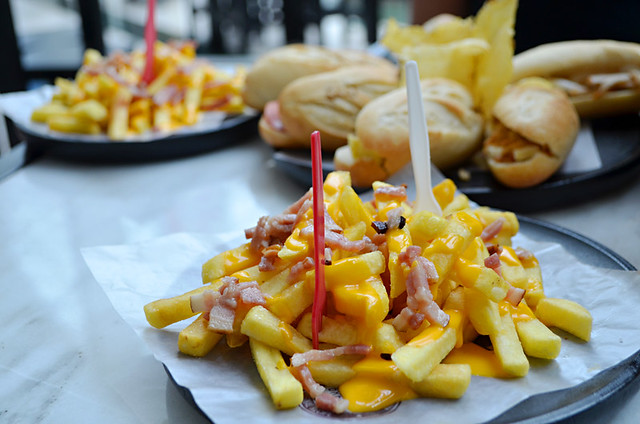 Last minute shopping took us back to La Villa again. This time we gave our business to 100 Montaditos which has an unusual system of ordering. You fill out a form, take it to the counter, pay, sit back down until your name is called over a tannoy, then you collect your order. There are always ridiculous offers at 100 Montaditos, this time it was every montadito (more like a small baguette) at €1. Six montaditos, two plates of papas locas (chips with ham and cheese) and drinks came to €11.50. It’s not the most authentic tapas in the world but it is fun. 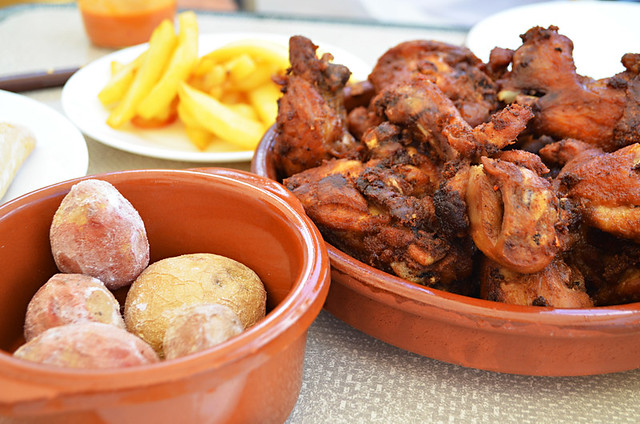 A late-ish flight meant we had time to introduce Liam to Adeje’s famous pollo al ajillo (garlic chicken) at Otelo on the mouth of the Barranco del Infierno. We didn’t arrive till after two when ex-pat and British visitors had given way to a full house of mainly Spanish speaking diners. Crunchy and delicious as always and a bargain at under €5 a portion.

Overall it was a satisfyingly broad range of tasty, mainly local, and very cheap eats. We spotted loads more interesting places to eat on our travels. But, after the indulgences of the past week, it’ll have to be a couple of weeks of 5:2 diet before we can go and check them out.