The truth is we didn’t want to go to the Sardinada in Puerto de la Cruz. Two days of hiking in summer temperatures in the Anaga Mountains and then Teide National Park had left us feeling frazzled and exhausted. Dragging ourselves out to head into Puerto de la Cruz for the traditional pre-embarcación sardine fest really didn’t appeal.

However, our nephew is visiting and he was looking forward to enjoying the first sardines he’d eaten since the last time he’d been with us for a Sardinada back in 2008.

As is so often the case with el Puerto, once we got their the infectious atmosphere worked its magic and exorcised all tiredness from our weary bodies.

At first it was the unmistakeable aroma of sardines being flame-grilled, wafting teasingly through the streets. Then it was the sounds of Latino, prompting a handful of chicas to salsa their way along the cobbles in the direction of the sardinada. 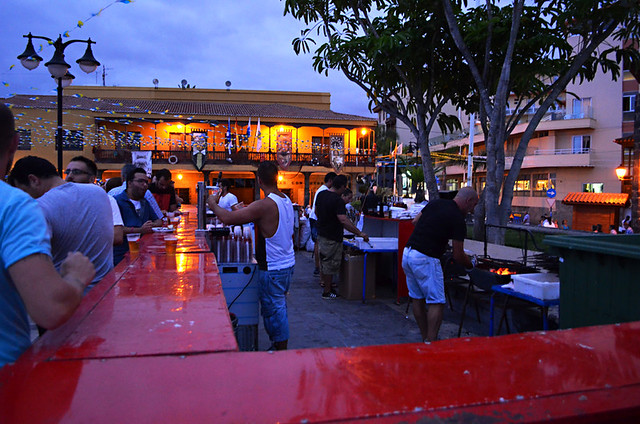 As it was still early (9-ish), Plaza Europa wasn’t packed. The drill is you queue up for a ticket (€3.50 for a handful of sardines with a chunk of bread and a plastic cup of wine or beer), hand it over at one of the sardine stalls, then find a spot to munch the sardines and people watch.

Thanks to the work being carried out to improve the San Telmo area, the Sardinada had been relocated to Plaza Europa outside the town hall; a venue we weren’t initially sure about. San Telmo is intimate, with everyone squeezed into a narrow space. Plaza Europa is a big, open square. 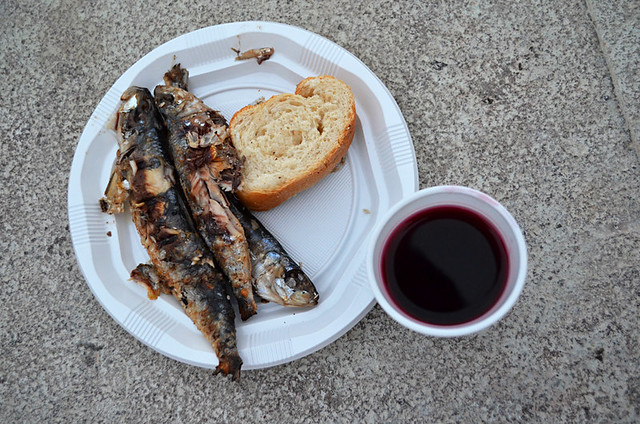 As it happened, the openness worked in its favour. We were able to easily grab a seat on the plaza’s fountain and watch as the square filled up. Some people took their sardines to the plaza’s fort like walls overlooking the sea, others ate on the move, simultaneously swaying to the Latino sounds.

In front of us two little girls chased a cloth mouse with two sticks, giggling as the ‘mouse’ was battered this way and that; a wee boy used a plastic cereal tin lid as a very effective frisbee whilst a group of skater boys and their girlfriends dumped their skateboards in favour of an impromptu salsa. 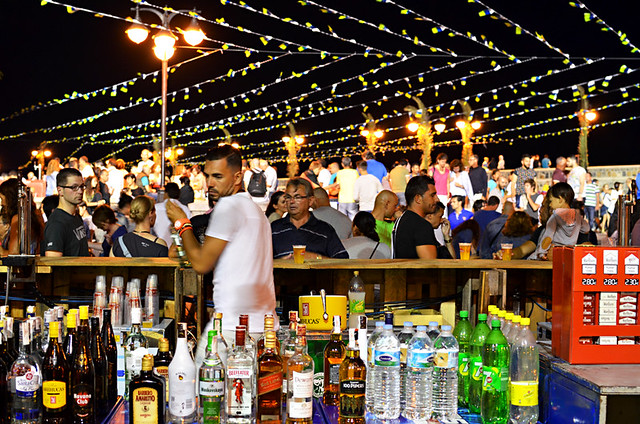 There was no segregation of ages. Everyone mixes in the same area, interacting with each other and  generally having a good time. It is the most wonderful of atmospheres… it always is. It is a community at play. Not everyone recognises this when it comes to fiestas.

Finishing our wine and sardines, we strolled streets decorated with Canary Islands bunting, simply wallowing in the atmosphere. With the Embarcación de la Virgen taking place the following day, there was an excited buzz all around the old town. 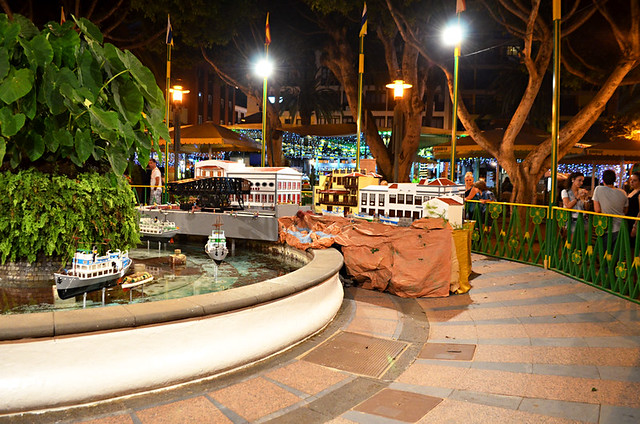 In Plaza Charco the smells of grilled fish were replaced by sizzling chorizos, candy floss and hot, sugary almonds. As well as aromas that would drive you delirious, the air was filled with the sound of chatter; happy Spanish chatter. Puerto de la Cruz might be the north’s main tourist resort but its heart and character are unmistakeably and overwhelmingly Canarian.

The yam fountain in the centre of the square had been transformed into a mini harbour, as it always is for the July Fiestas, with model banana boats lying just ‘offshore’. This was the way some tourists used to arrive. What days those must have been. 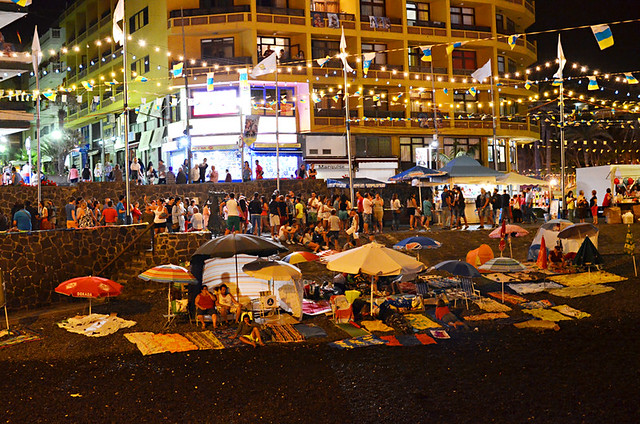 The real harbour was a hive of bustling activity with chicas and chicos streaming to and from the funfair whilst older Portuenses paid their respect to the fishermen’s shrine outside the Frigata Bar. On the harbour itself, fiesta devotees had already claimed their spots for the embarcación at 5pm the following day, with beach umbrellas already erected on the small beach and towels spread along the harbour wall.

If colourful local culture is your thing, it’s impossible not to be caught up in the electric fiesta atmosphere. It is an addictive Tenerife drug that we can never get enough of.

Which is just as well as now we’ve got to drag ourselves back for the ‘big’ fiesta day today.