When it comes to steak I’m a novice. I know I like it medium rare and that to tell a chef you want it well done is akin to shoving a crucifix in a vampire’s face. But, being more of a fish and seafood fan, steak isn’t something I usually order in a restaurant, especially in the Canary Islands where I’m still working my way around nature’s watery larder. However, a friend visiting Tenerife invited us to have dinner with him and his family at Brunelli’s Steakhouse in the Punta Brava area of Puerto de la Cruz.

He has two young girls so dinner was earlier than we’d usually eat, which turned out to be a bonus. As we strolled along the promenade behind Playa Jardín we were treated to the sort of smile-inducing sunset glow which once earned the town the title of the golden port. It’s a perfect mood setter for anyone looking for a romantic dining experience, especially as the restaurant has a panoramic window overlooking the north west coast so the sunset experience continues once inside. 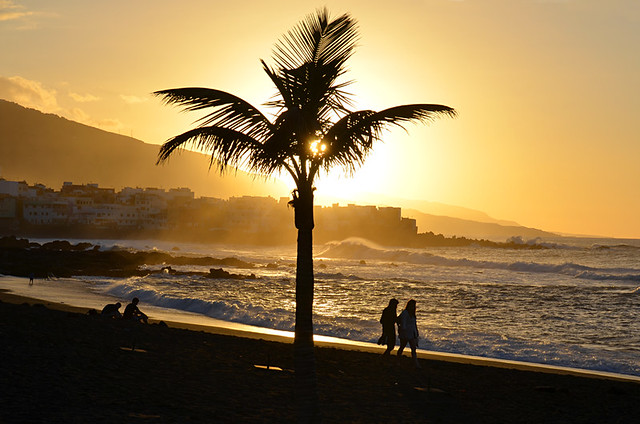 From the entrance, a long contemporary bar area leads past an open kitchen where two things catch the eye; Brunellli’s unique Southbend oven, more furnace than oven as its 800C heat sears steaks in an instant. The other is a glass refrigerator filled with impressive cuts of meat – a steak showcase.

The décor is smart and modern with parquet flooring, exposed brick walls, chocolate leather seats, white linen table cloths, and bull statues of various sizes. Then there’s that wonderful window with its hypnotic views… which totally distracted for the first few minutes after meeting and greeting our friends who’d nabbed a King Arthur type table in prime sunset viewing position. 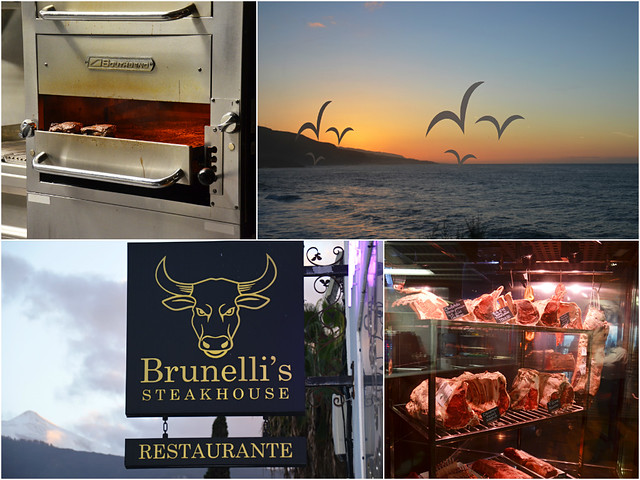 The Food at Brunelli’s Steakhouse
Robin, a fellow travel writer who’s devoured steaks in top restaurants around the world, gave us a quick lesson in the art of choosing and eating steak as a waiter paraded a platter which featured the steak stars of that night’s menu. Cuts of Uruguayan rib eye, Chateaubriand, US rib eye and Irish Angus were of varying shades of red, some bright others dark, almost wine coloured.
Robin explained that many people thought steak should be pink if they were fresh, not understanding that maturing the meat properly adds extra flavour. Another tip was a good steak restaurant shouldn’t need knives with serrated edges. The knives at Brunelli’s were like mini machetes, another sign of a serious steak restaurant. 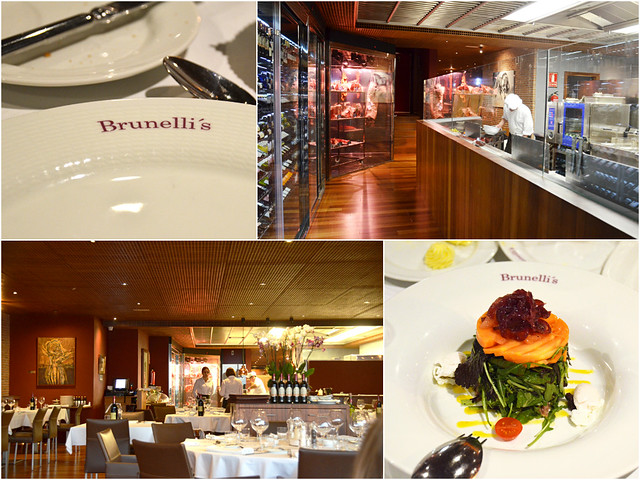 Bamboozled by the choice we agreed it was best if Robin took the helm. Without hesitation he ordered Chateaubriand, rib eye on the bone and rib eye off the bone. There were a couple of seafood dishes on the menu but personally I would never order meat in a fish restaurant or fish in a restaurant specialising in meat.

Whilst waiting for our meat to be seared in the Southbend we shared a trio of starters; homemade chorizo on red onions, Brunelli’s special salad which included papaya and poached quail eggs, and burrata Italian cheese with truffles and sautéed spinach. 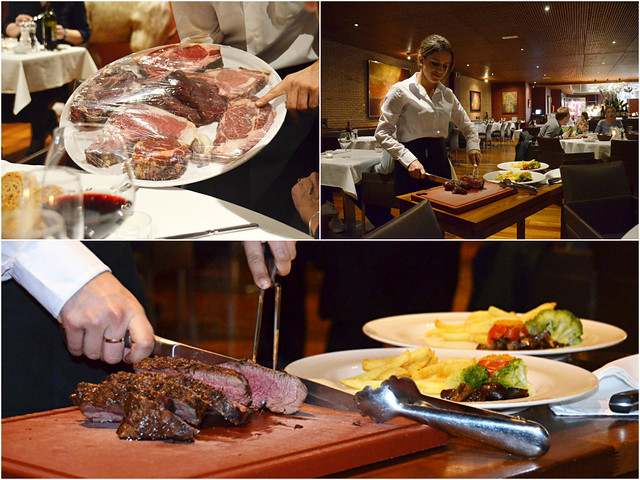 Though the steaks, huge cuts on three separate plates, were cooked to order (all medium-ish rare) you can also have a hot plate to continue cooking for those folk who don’t like their meat too pink (in this case the girls). I mentioned at the start I’m no steak expert but it was obvious the cuts were quality and cooked beautifully – crispy, charred exteriors with juicy red centres.

Accompanying French fries, broccoli, stuffed tomato and mushrooms on our plates were sideshow attractions, this was all about the steak. And it was somewhat of a revelation; all three tender cuts revealing surprisingly different and quite subtle flavours (not a surprise I’m sure for anyone who knows their steak). A bottle of local Tajinaste red with a decent personality helped tease out the smoky deliciousness further. 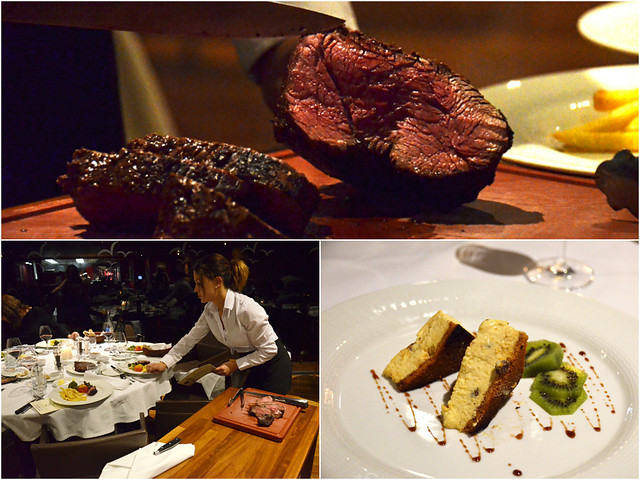 Apart from the steak and excellent company, one of the highlights was the opening of the panoramic window to allow the sound of the surf to join us for a brief period (it was a February night after all). That must be extra special in Tenerife’s balmier months.

The simple truth is I’ve never enjoyed steak as much. The Chateaubriand especially had me rethinking my culinary stance when it comes to steak, which I’ve always thought of as a safe option for unadventurous palates. Steak might be commonly found on menus across the island; however, Brunelli’s has elevated the art of cooking it to a completely different level.

If you’re a British visitor to Tenerife, don’t be too alarmed if you’re surrounded by a posse of smiling locals who want to throw their arms around you and give you a big hug… […]