Whilst strolling the calm and historic cloisters of the hilltop university buildings in Coimbra in Portugal recently we came across steps with a message written on them aimed at us and people like us.

Having grown up on a Scottish island where tourism was vitally important to the economy, my first thought was ‘don’t we all? Get over yourself’. 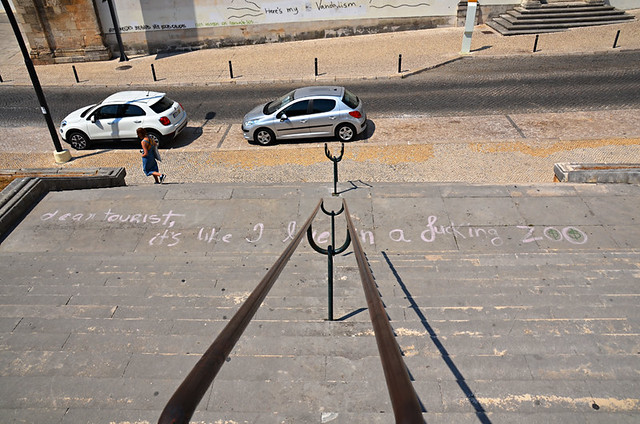 As we descended into the main centre, there were more messages, same author. The second asked if it felt good to be treated like a walking money bag whilst the third accused us of being in league with the devil. It all looked like the work of a single disgruntled student who was too naive to realise the importance income from visitors meant to the city, or too privileged to care. But a fourth message made me think again. I’ll come back to that in a bit.

A couple of years ago I wouldn’t have given the graffiti a second thought, but with current news headlines of an anti-tourist backlash at some popular destinations it stood out more than it would have otherwise. 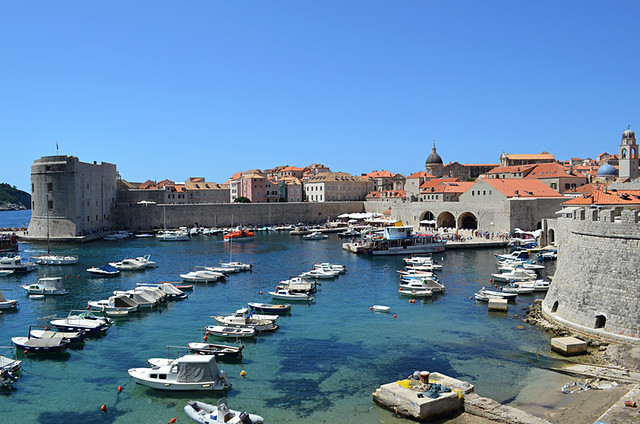 As well as writing about Tenerife on the Real Tenerife, we also write about other Canary Islands and various destinations around Europe on our Buzz Trips website, for newspapers, magazines and a specialist slow travel company. This work has involved visiting some of the most popular cities in Europe. The harsh reality is that a backlash against impossible to manage tourist numbers, as well as inappropriate behaviour by some visitors, is not a surprise.

Four years ago we wrote about Dubrovnik being ruined by the sheer volume of cruise passengers which swamped the old town daily. We saw a similar impact at the UNESCO World Heritage Site of Carcassonne in France, and at Hallstatt in Austria, a town so beautiful it’s been replicated in China. The last time I was in Barcelona, La Rambla was not a good place to be at night. It had become the domain of leery stag and hen parties who showed no respect for the locals and treated the city as though it had been purpose built for their pleasure. But I have limited sympathy. The authorities in these locations haven’t managed the situation as well as they could or should have. Greater numbers of tourists meant big buck signs flashing in front of a few eyes. Dubrovnik is now taking the sort of action it should have taken years ago by capping the number of cruise visitors. 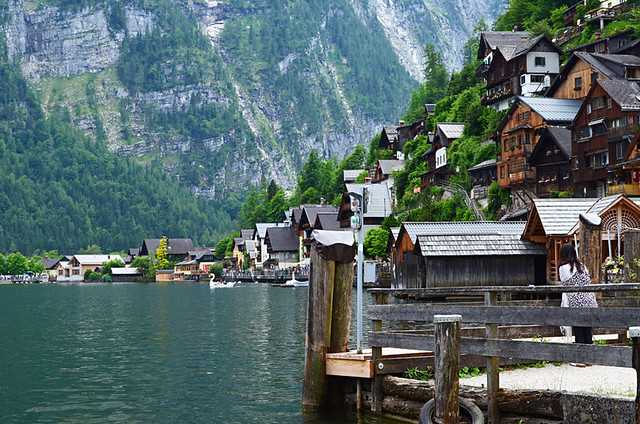 Which brings me to why a tourist backlash won’t happen on Tenerife.

One of the reasons why there has been a backlash against tourists in some locations is the balance of locals to tourists has switched, usually as a result of a massive influx caused by armies of coach excursions or cruise ships depositing literally thousands of visitors.

These are historic towns and cities whose personalities are being eroded by this new imbalance, the sheer volume of visitors are stopping locals doing what people in these cities have been doing for generations. We’d all soon start to resent not being able to go about our daily business. 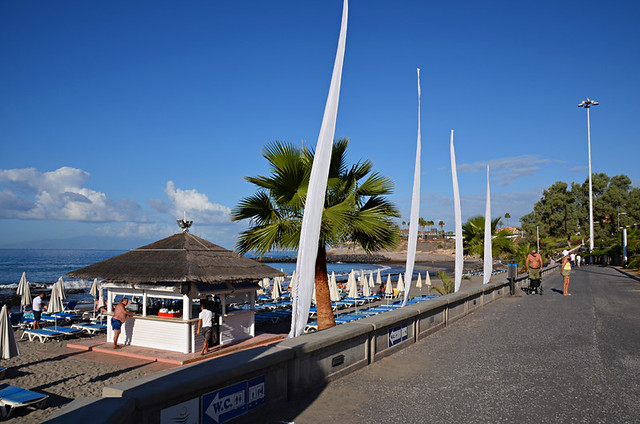 In the case of Tenerife, on the other hand, resorts have been built purely for tourists’ pleasure. It is their sole reason to exist. Neither culture nor local life is eroded by the number of visitors who enjoy their holidays in Playa de las Américas or Costa Adeje. The more, the merrier. I have a Tenerife guidebook from the late 60s when Playa de las Américas didn’t exist. The most upmarket parts of Costa Adeje are years younger than Millennials. There’s no danger of ‘locals’ backlashing against tourism because just about every person who lives there is only there because of tourism. Places may have changed in the last few decades, but that happens everywhere whether tourism is involved or not. 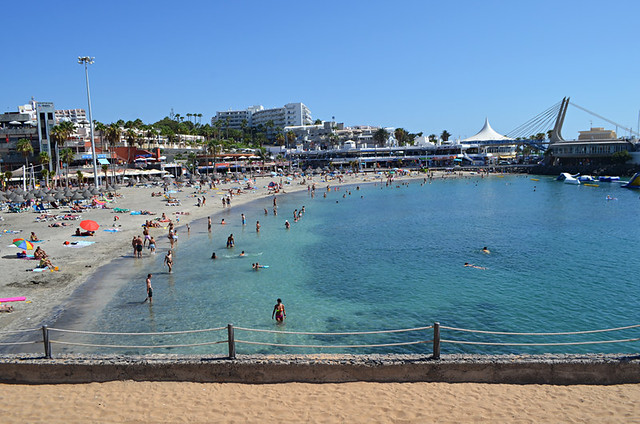 As the Tenerife authorities have commented in the Spanish press, there’s no real concern about there being a tourist backlash on Tenerife because it is simply not like most other destinations which are experiencing issues. The majority of Canarios don’t live where most tourists stay, subsequently the impact on their daily lives is not the same. In a way both visitors and locals on Tenerife co-exist symbiotically. It’s a healthy combination which doesn’t erode tradition, culture or, importantly, community. 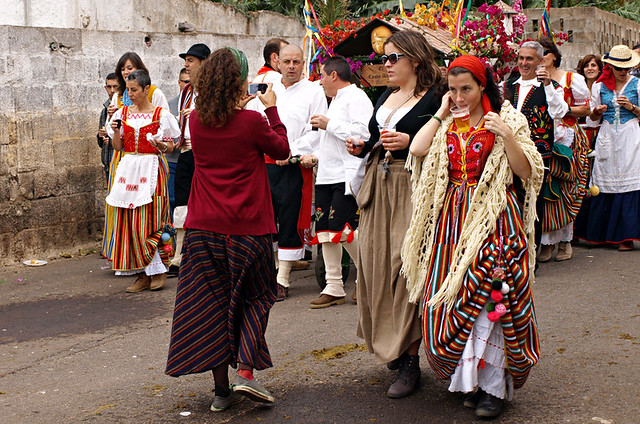 The only anti-visitor graffiti I’ve seen on Tenerife has been aimed at Spanish mainlanders, and it’s been on crumbling walls since we first set foot on the island.

But that didn’t stop one British tabloid from trying to bring the Canary Islands into the tourist backlash story with a dodgy and weak link. There’s one very good reason for that. The Canary Islands are massively popular, mention them in an article, even when it’s a tenuous connection at best, and you pull in more readers. It’s what is known online as clickbait – hooking the fish. 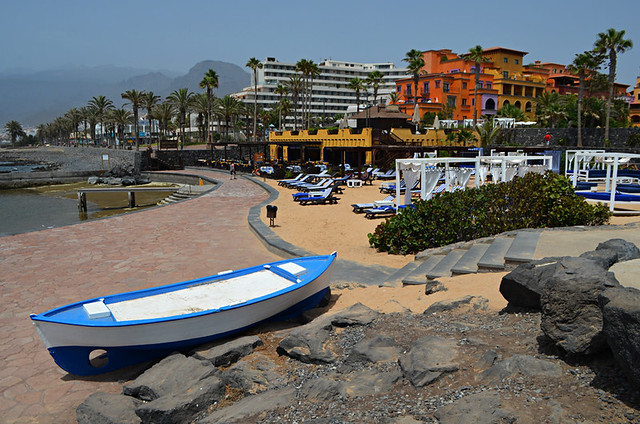 But that’s not to say tourism hasn’t had a negative impact on the life of some locals, especially ‘new locals’ in resort areas of Tenerife. Which takes me back to the fourth message from the disgruntled student in Coimbra – “I’ve been kicked out of my apartment because the landlord makes far more money renting out to tourists.”

That’s when I became sympathetic. Apartment rental companies like Airbnb are having a dramatic impact on communities in popular destinations. As a result the availability of rented accommodation for people who live and work in these areas is more limited/expensive. That is causing resentment in many locations. But even that isn’t likely to result in any backlash on Tenerife as the people who are affected most are likely also to be people earning an income from tourism.

Who’s going to be crazy enough to bite the only hand that feeds them?