Stepping out of the minibus alongside the neat rows of vines that climb the hillside above the shimmering coast of Candelaria, the sun is fierce and the ground is parched. Walking behind Oscar, I hang back slightly to avoid the little clouds of dust that escape from his heels. We reach the first vines and turn into the row.
“Try these small grapes at the back of the vine,” says Candido Hernández, the man responsible for this expansive estate and whose initials appear over the door and on the labels of his award winning wine.
Stepping forward, I watch my brand new, leather sandals sink into the soft dust, my toes barely visible above its red density.

On reflection, strappy sandals were probably not the best footwear for a visit to a bodega. 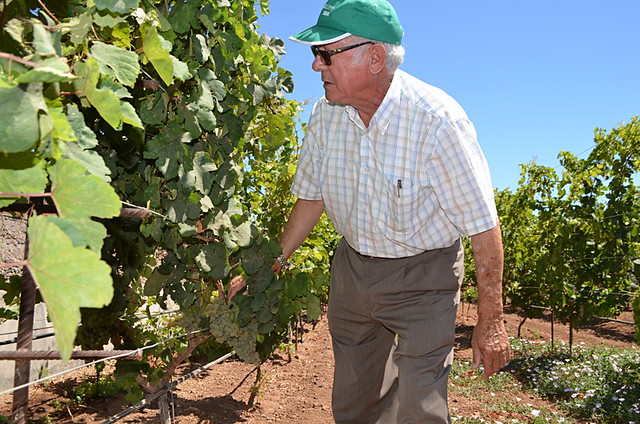 A month ago I wrote a short blog on here about the Bodegas CHP Balcón Canario wine winning double gold at the San Francisco Wine Awards at the end of June. Oscar Hernández, fifth of six sons in the Bodegas CHP dynasty and passionate about the family’s wine trade, read the blog and invited us to come and visit the bodega. As few things ring our bell more loudly than being introduced to the best of the Canary Islands producers, we arranged to head along to La Reconda bodega in Candelaria to get to the roots of the family’s vinicultural success. 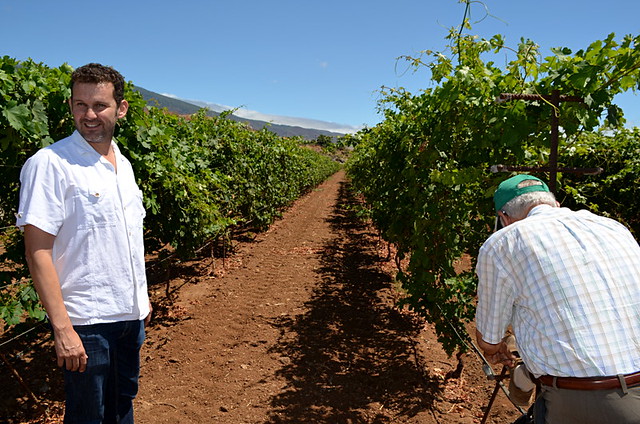 Born in La Matanza, at the very heart of Tenerife’s rich tradition of quality wines, Candido Hernández Pío has taken the traditions of his birthright and combined them with agricultural acumen to produce and blend wines that break new ground whilst retaining their centuries old heritage. The only bodega on Tenerife to be accredited under two denominations, Tacaronte-Acentejo and Valle de Guimar, the vines that produce the five labels of Bodegas CHP are cultivated in El Sauzal, La Matanza and here, in the Guimar Valley. 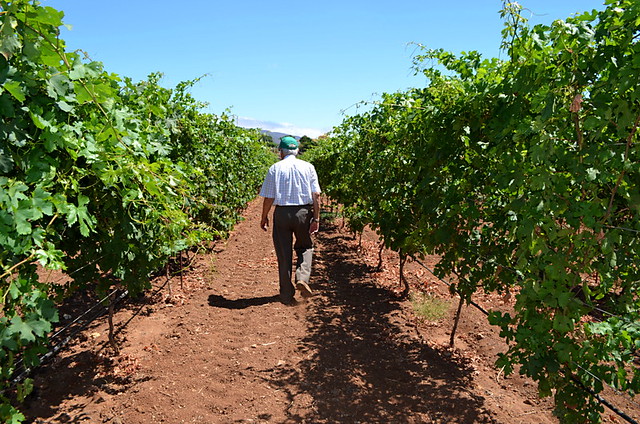 Driving through the 7 hectares of La Reconda, Oscar points out the various test beds of grape varieties that are grown here, their feet planted in soil from Tacaronte, their faces turned to the cloudless sunshine of Tenerife’s east coast. Syrah, Ruby Cabernet, Moscatel… all have a presence here and will go on to be transplanted, either here amongst the Vijariego Tinto, Malvasia and Marmajuelo vines, or in the north amongst the Negramoll and Gual. Passing alongside terraces on one side and a high wall on the other, a group of labourers are breaking rocks and levelling paths.
“We’re constructing a stone archway here,” says Oscar, motioning to the current dusty opening that leads to the vines. “All this will be levelled and paved to create a proper pathway for people to walk between the vines.”
Clearly my sandals and I are a little premature. In the not-too-distant future we’ll be dressed perfectly for our visit. 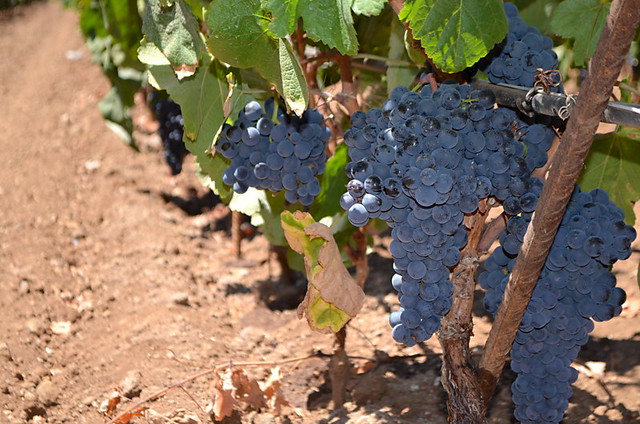 Leaving the vines and driving a couple of kilometres further up the coast we arrive at the finca where, stamping the dust off our shoes, we enter the delicious cold of the fermentation room where the gleaming, stainless steel tanks stand, awaiting this year’s harvest which will take place around the middle of August. Then it’s over to the newly prepared tasting room where a cabinet proudly displays the awards that have been such a prominent feature of Bodegas CHP over the last two years. 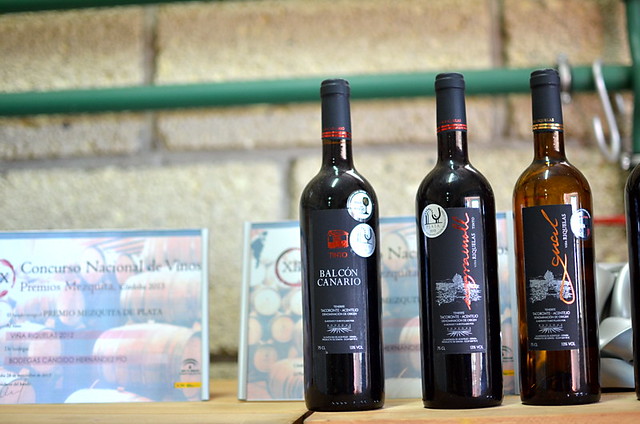 First up on the tasting menu is the San Francisco bronze medal award winning Gual 2013. Light, crisp and elegant with soft melon tones and a hint of cinnamon, the blend is 85% Gual and 15% Malvasia and Verdelho. Not usually a white wine drinker, I’m in danger of being seduced by its summery freshness but duty calls and it’s onto the strawberry tones of the gold medal winning Negramoll 2013, a wine that has already secured a permanent place in our wine rack. Light, soft and peppery with a hint of chocolate, I’m still torn as to whether or not I enjoy this holder of a Gran Baco d’Oro awarded in Madrid in June, even more than the Balcón Canario. 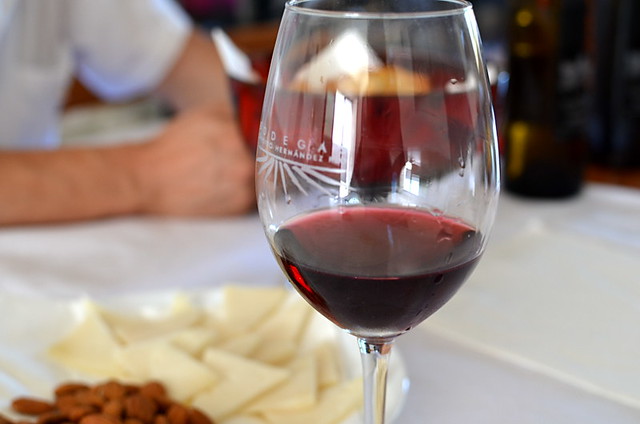 But then Oscar pours the double gold medallist and one sniff reminds me why I felt moved to pen last month’s blog in the first place. A perfect blend of 70% Listan Negro and 30% Negramoll, its blackcurrant fruit morphs into vanilla and allows just enough mineral undertone to whisper its aristocratic breeding without interfering with its silky finish. Did I mention that I rather like this wine?

Just as I could happily kick my dusty sandals off and settle in for the rest of the bottle, Oscar pours a glass of the 2012 Calius Tinto produced under the Valle de Guimar denomination. A spicy little red blended from Tempranillo, Vijariego and Merlot I can’t believe I haven’t tried it before and mentally add it to future shopping lists. 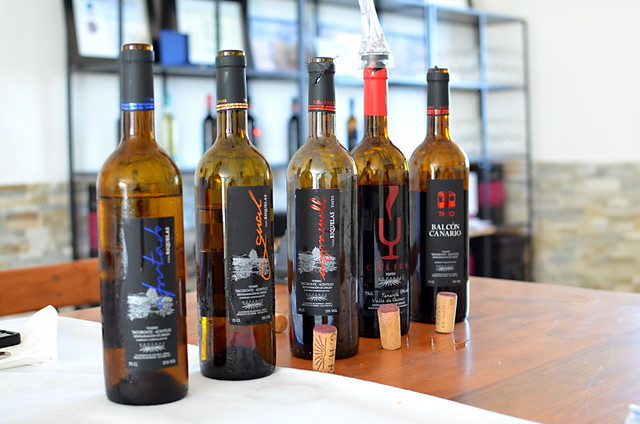 To round off our tasting session, Oscar produces the surprise of the day, a Riquelas Afrutado blend of 90% Moscatel with Listan Blanco whose elegant, silky sweet summer fruits languidly slip down the throat like honey from a spoon. It’s the perfect end to our perfect day amongst the vines, and leaves us feeling suitably mellow and filled with optimism for the future because another Tenerife producer is getting it so right.

Guided tours and tastings are available by arrangement, contact via the website. Bodegas CHP wines are widely stocked in bars and restaurants across the island (we have a list so if you want to know if your favourite restaurant stocks it, feel free to ask in the comments) and are available to buy from:
Hipercor – Puerto de la Cruz, La Laguna
Al Campo – La Orotava, La Laguna
El Corte Inglés – Santa Cruz
Duty Free Shop – South Airport

You can also buy online direct from Bodegas CHP and there’s no p&p charge for deliveries within the Canary Islands.

PS. Within days of our visit Oscar sent us notification that the Balcón Canario had just received its latest award, a silver medal at the prestigious CERVIM wine awards in Italy.

Have You Tried Goat on Tenerife?

Given that goats are commonplace, it should come as no surprise to learn that they’re equally common on menus in traditional Canarian restaurants across Tenerife. […]