To you and me it might be the light show of the year in the Tenerife sky, but the Fuegos de Mayo firework display which lights up the sky above the Orotava Valley on the night of  the 3rd of May is a class war. 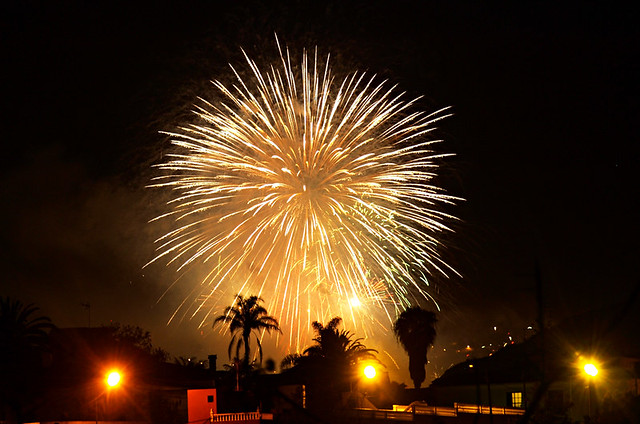 The Fiesta of the Crosses on Tenerife
The 3rd of May is a big day in the Spanish Calender, it’s the day of the Fiesta de las Cruces (Festival of the Crosses, also known as the Cruz de Mayo) when crosses all over Spain and South America are decorated to commemorate, so the story goes, a search for the cross on which Jesus died.

Coincidentally, or conveniently, in the Canary Islands both Santa Cruz de Tenerife and Santa Cruz de la Palma were founded on 3 May (different years), so there’s a good reason for throwing a big bash.

In Santa Cruz, Los Realejos and Puerto de la Cruz especially, the local people go to town when it comes to dressing up crosses for the big day. It’s worth visiting any to wander around the streets seeking out well dressed crosses. In Puerto de la Cruz I particularly like the cross on the side of Casa Aduana, the old customs house beside the harbour. 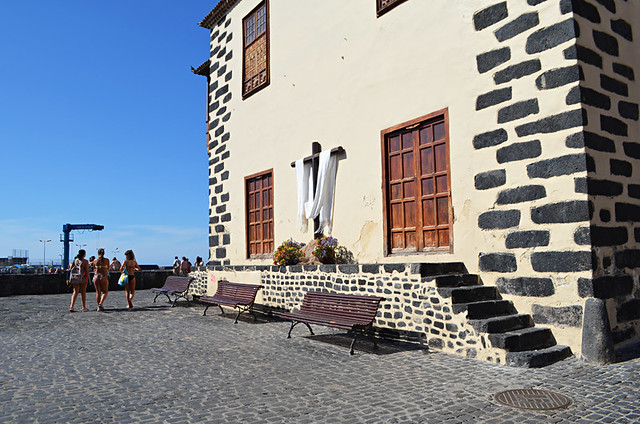 In Los Realejos there are upwards of 300 crosses to be decorated. In past years we’ve driven up to as close to the upper part of Los Realejos as we can get without being stuck in queues of people looking for places to park. Then we simply stroll the streets popping into houses (it’s the done thing), ermitas and churches to have a look at the variety of designs.

This year (2016) free, open-topped buses and a tourist train have been laid on to make a tour of the crosses a bit easier and more accessible to those who might struggle on the town’s steep old streets. These depart from Avda. Los Remedios between 10.30am and 6pm. There’s also a free bus from Puerto de la Cruz which runs from 10am to 5pm (last bus back to Puerto is at 6pm).

These sound like a good way to have a gander at the crosses but as the main event of the day isn’t until after dark, walking the route closer to the start of the firework display is still the best way to soak up the atmosphere, plus the crosses look more magical after dark. 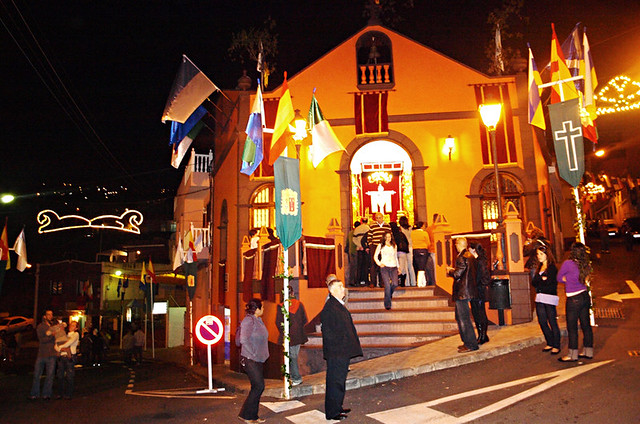 It initially started in 1770 as a bit of rivalry between two streets, Calle del Medio (home to farm labourers and manual workers) and Calle del Sol (where the professional classes lived) and involved a contest to see who could decorate their neighbourhoods with the most elaborate floral displays.

After the Hermanos Toste opened a fireworks factory in the town in 1788 the floral displays were added to with something which had a bit more fizz, and the battle of the fireworks erupted in spectacular fashion. Since then the event grows louder every year as both streets, with the help of two firework factories, strive to design bigger and better displays in a bid to outdo each other in this most exuberant and colourful of class wars. 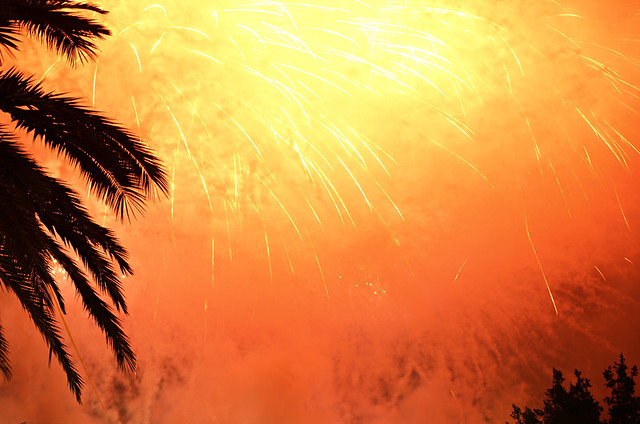 What actually happens at the Fuegos de Mayo?
The first time we went to the Fuegos de Mayo we didn’t really know what to expect. Information about what happened at fiestas was usually quite shallow – more basic rehashes of press releases rather than articles by people who’d actually experienced events first hand. So we learned the hard way by standing for hours shivering (stupidly a friend and I wore short sleeve shirts – because it was May in the Canary Islands we expected a sultry night).

The firework display doesn’t start until quite a bit after a procession leaves the Iglesia de Santiago Apostle at 10pm. By that time we were numb having arrived in the town around 8pm. A single firework at various stages along the route signals the procession’s progress… which can seem to take an interminably long time.

However, once the first ‘proper’ firework lights up the sky, the magic begins and numb cheeks are forgotten as the fiesta in the heavens begins and wave after wave of multicoloured spheres explode sending twinkling, man-made shooting stars arcing back towards the earth. 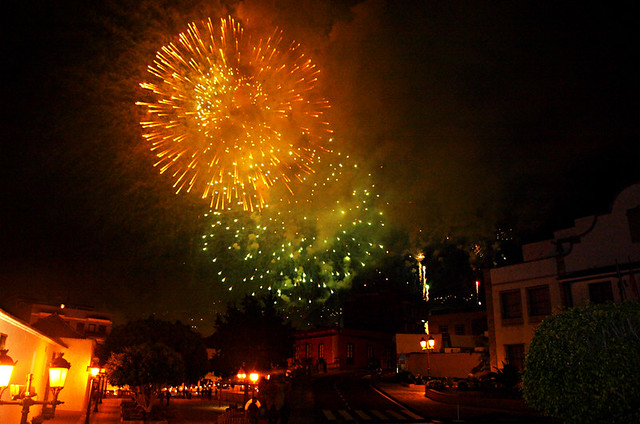 What makes it stand out from any other ‘spectacular’ firework display is that, thanks to the involvement of the fireworks factories, you often see imaginative and innovative fireworks you simply don’t see anywhere else. We’ve witnessed some beauties over the years which have left us standing open-mouthed as one street unleashes a beautiful barrage and then the other street counters with an equally bewitching response.

The official blurb tells you the display lasts three hours, which it usually does… more or less. But that’s from start to finish, not how long the actual fireworks display lasts. There are quite long gaps between each pyrotechnic skirmish. That doesn’t make the Fuegos de Mayo any less of a WOW experience, but don’t go along expecting 3 hours of non-stop explosions. And remember to take a jacket.

Where to stand
It’s a firework display, you can see it from just about anywhere. However, for the best view of the show head to where the crowds are or find a space which isn’t too enclosed (e.g. a narrow street) and which gives a good view over the rooftops of Los Realejos.