In theory it should be relatively easy on Tenerife to find one of the magical works of art constructed by resident Italian artist Luigi Stinga. His eye-catching creations are impossible to miss, dominating whatever landscape they occupy – a giant lizard slithering down the steps in Garachico; Poseidon bossing Playa Fañabe; a thoughtful muse sitting on a wall in El Sauzal, pondering the book she’s reading.

They turn up on such a regular basis it should be easy to find one of his works. But it isn’t. They don’t have a very long lifespan. 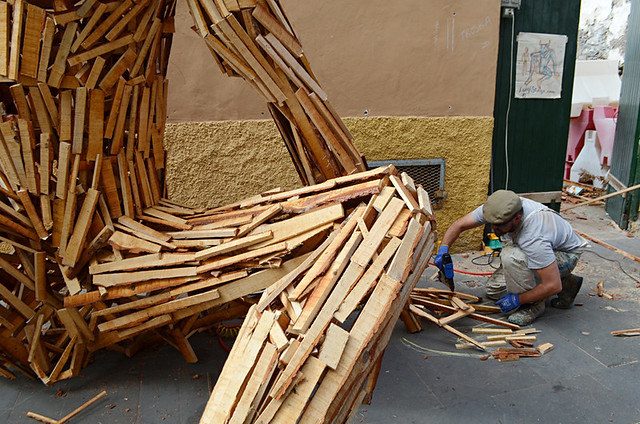 For over eight years the Sorrento born artist has been creating intriguing and enchanting works of art across Tenerife (and occasionally other Canary Islands); works whose beauty have wooed and wowed residents in towns and villages… before he burned them to the ground. Apparently it’s based on a tradition from his home town – a good luck thing, but obviously not for the sculptures.

The first piece I saw was a giant Siren looking out to sea at Punta del Viento in Puerto de la Cruz. She was a gorgeous, mysterious creature made incredibly from wood. I say incredibly because despite being made from the sort of slats used on wooden crates, her form seemed all flowing curves. As well as being beautiful to look at, she was full of life. 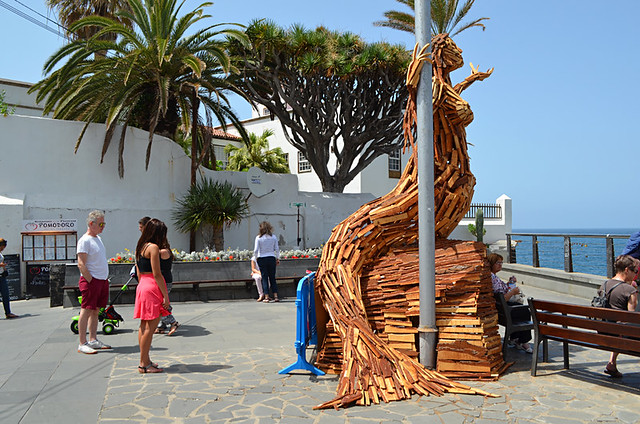 However, she was a tragic creature, created to be burned on the Noche de San Juan, Midsummer’s Eve. The Portuenses liked her so much some pleaded for a stay of execution. But, like all of Luigi Stinga’s wooden wonders, her fate was sealed.

This is transient art. 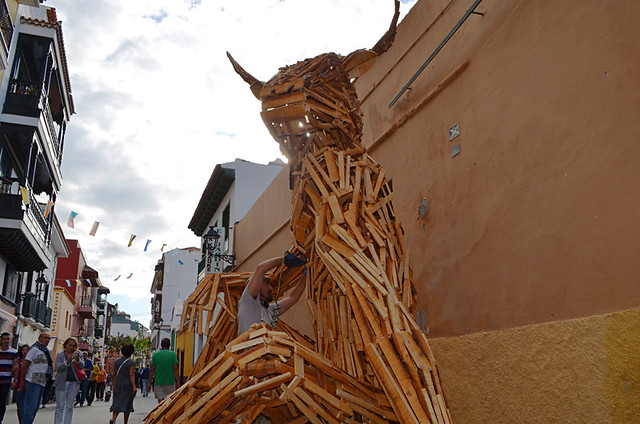 The next work I saw in the flesh, so to speak, was a Minotaur built for Puerto’s art in the street festival Mueca. This time I was lucky enough to see the artist at work, magically breathing life into the seated form of the giant mythical creature with just a drill. It was hypnotic to watch how a few simple wooden slats could take the natural shape of a hand. Luigi could easily have been a man screwing an IKEA purchase together, but by drilling a screw in here and there somehow ending up with a mythical masterpiece rather than a wardrobe. 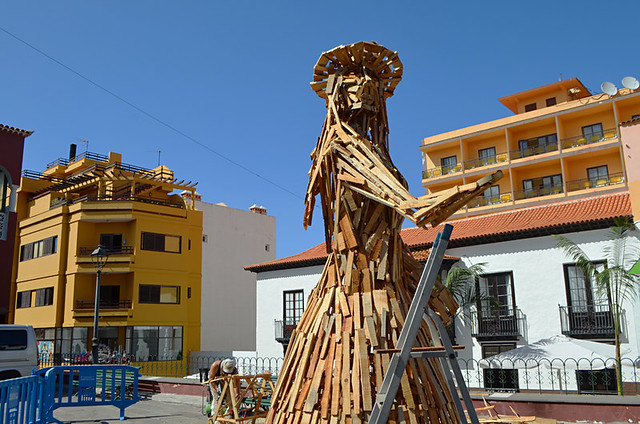 The third work I’ve viewed up close was a flower seller in Plaza Iglesia, this time Luigi even managed to make the slats resemble a traditional Canarian costume.

As more and more municipalities are commissioning these temporary works of art all across Tenerife, there’s more chance than ever of being able to marvel at one of Luigi’s pieces. But if you hear about one, don’t dither before seeking it out or the opportunity just might go up in flames.