Whenever we eat out in Tenerife we rarely opt for the ‘meat and two veg’ option. There are two reasons for this. The most obvious is in traditional restaurants on Tenerife you’ll be lucky to find ‘one veg’ on your plate let alone two. The other is that on our dining preferences chart, bog standard meat dishes come some way down the list. We’re fish and seafood fans so Tenerife and the Canary Islands are like a gastronomic treasure chest to us, full of marine goodies. We also like to experience as many taste sensations as we can at the one sitting. Degustacíon (taster) menus in restaurants serving creative cuisine are one way we like to do this. But more often than not we’ll opt for a selection of tapas dishes. 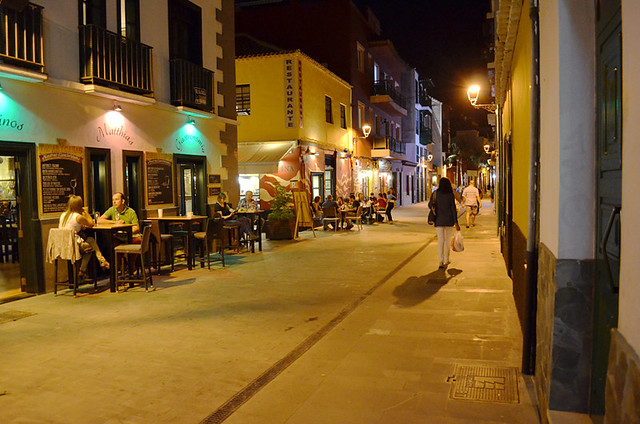 We’ve written lots about tapas on Tenerife and tapas routes but a discussion on Tripadvisor recently made me realise we hadn’t actually written about where to indulge in tapas in Puerto de la Cruz. Tapas on Tenerife isn’t quite the same as tapas in parts of mainland Spain, but neither is it as different as some people think.

When visitors to the island ask about where to eat tapas, most aren’t really asking about where to squeeze in beside some grizzled locals at a typical no frills Tenerife bar to pick at small rations of bar food. They’re generally asking for recommendations where they can enjoy a selection of small and tasty traditional dishes in pleasant surroundings.

With this in mind, these are our favourite places in Puerto de la Cruz for tapas. Puerto, incidentally, is a great Tenerife location for attractive restaurants with interesting tapas menus. 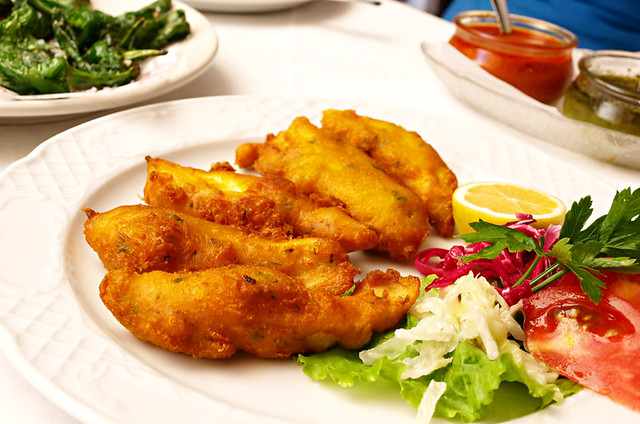 The first place we ate tapas on Tenerife, Bar Luis is located off Plaza del Charco in a delight of a colonial courtyard. For years this was one of the first restaurants we’d bring visiting friends and family to because it’s such a beautiful setting. There’s an extensive menu which features most of the classic Tenerife tapas dishes, one of our faves being their churros de pescado – fish goujons in herby batter. 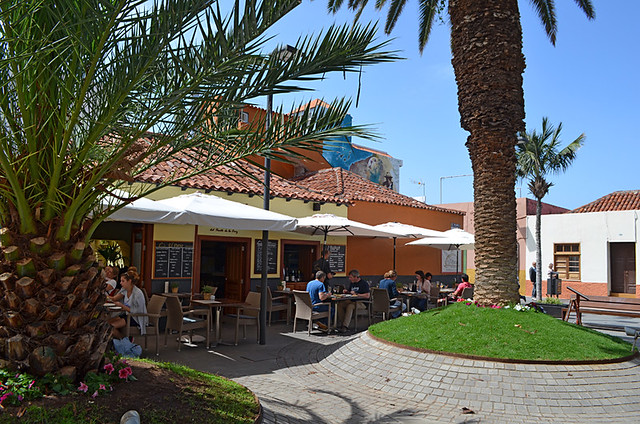 El Patio is a prime example of what makes tapas testing in Puerto de la Cruz so enjoyable. The setting is a pretty plaza in the fishermen’s district; the restaurant is inside a charming old cottage (typical of the neighbourhood), and the tapas can be quite creative. For example, the tapas platter for two can include octopus carpaccio. 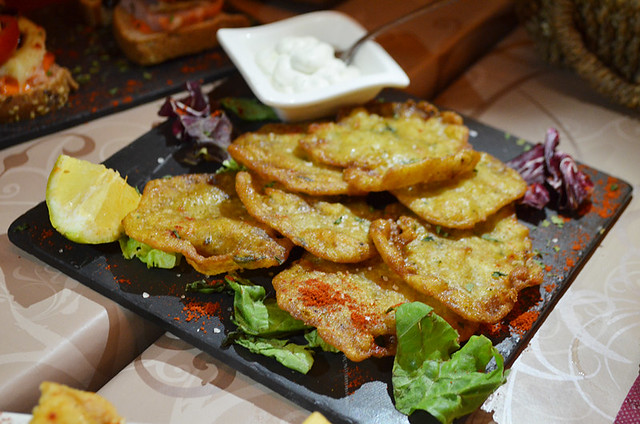 The words below the restaurant’s name, Tapas y Pintxos, give away this is a tapas restaurant with its roots in mainland Spain – pintxos being the Basque name for small bar snacks. La Clave is a stylish, contemporary tapas bar which has the usual favourites as well as some offerings, such as tortillitas de camarones (shrimp fritters), which aren’t common on Tenerife tapas menus . 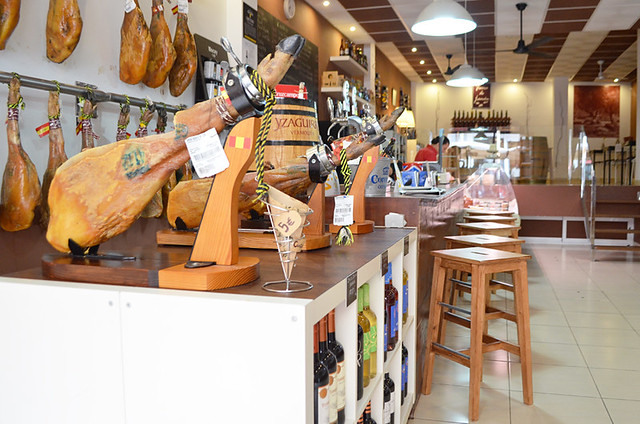 One for classic tapas aficionados, Tierra de Jamón does what it says on the lid – it’s the land of hams and the place to try delicious slivers of Iberico. There are also chorizos, empanadas (pies), cheeses etc. with an excellent selection of wines to help the tapas have a silky smooth journey into your stomach. With hanging jamóns lined up behind the bar, this part deli/ part tapas bar is the real McCoy. 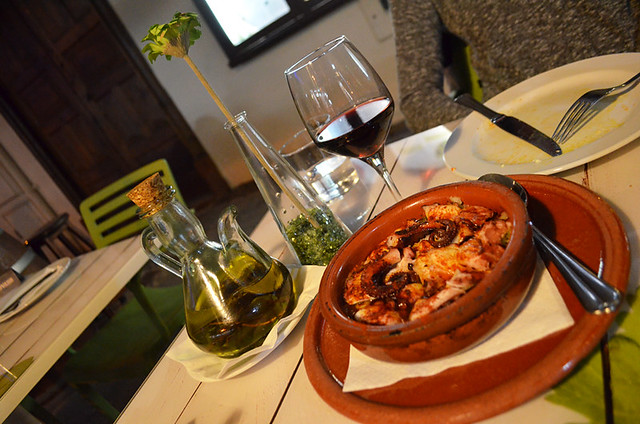 Often the first place on our list when we fancied tapas as it’s a good looking restaurant in a traditional style (chunky wood tables inside), the staff are very friendly, and it has some absolutely stonking tapas dishes. As a black pudding fan I particularly like their morcilla con almendras y miel (blood sausage with almonds and honey). But the standout dish is their take on pulpo a la gallega – octopus and mash potato – a winning combination. 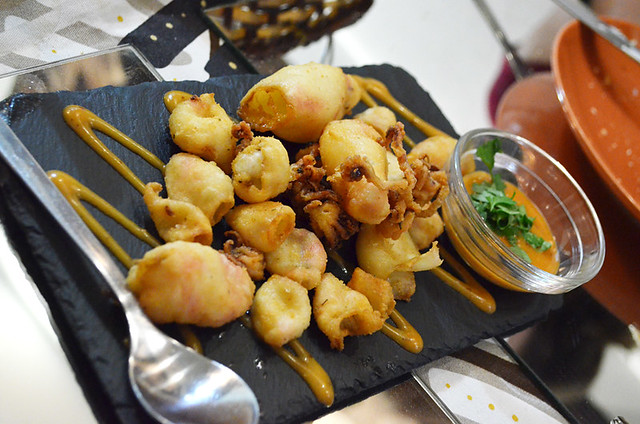 Located on the main road into Puerto de Cruz in La Paz, Bodeguita Algorrobo is never as busy as it deserves to be, probably due to its position outside the main centre of town. It’s an excellent little bodeguita with above average tapas served with more flair than most trad restaurants. Their papas Algorrobo are worth making a visit for alone. Also exceptional are the crispy chipirones (small squid). 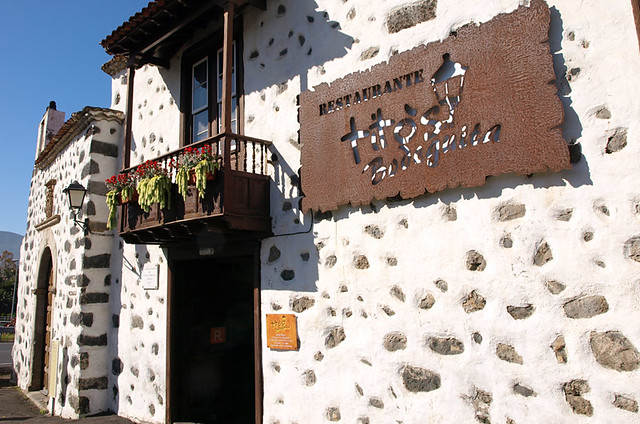 Another restaurant outside off town but definitely worth making the effort to visit. The setting, inside a 17th century colonial mansion, is a wow. Two things will have your decision making skills in meltdown; where to sit (too many delightful options) and what to eat; the menu is full of delicious sounding items. It’s not strictly tapas, but many dishes are specially designed to be shared. The capricho de pollo (crispy chicken strips coated with almonds) is a must. 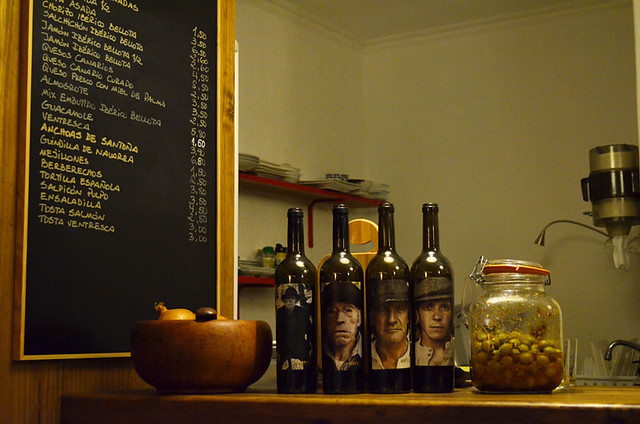 More wine shop than tapas bar, La Vinoteca only has a few tables and a limited tapas menu… and it’s a fabulous place to get to know truly local wines whilst picking at almogrote (cheese pate from La Gomera), juicy tuna chunks on rustic bread, savoury jamón slices, and succulent bite-sized pieces of spicy lomo. Small, sophisticated and the sort of tapas bar that many visitors don’t know exists on Tenerife. We love it.

These might be our pick of places to eat tapas in Puerto de la Cruz, but I could easily have gone on and on and on and on, listing restaurants and bars in the town where we’ve enjoyed tapas. Ironically, we’ve never eaten at two of the places usually referenced on Tripadvisor when the subject comes up – Arcon and Bar El Camino. No real reason why, Arcon was given the thumbs up by friends whose opinion we value highly, but every time we decided to try it, we ended up elsewhere. El Camino we passed a thousand times and never stopped because the tapas, although it looked good enough, didn’t seem any different than any other trad place with a tapas menu.

The point is, there isn’t a shortage of places to try tapas in Puerto de la Cruz. On the contrary, there are just too many good places to get round.