I tend to view Tenerife’s fiestas a bit like going to a music festival. There will be a lot of very good groups to enjoy, but there will be one special one, a super group, which headlines the festival. The main attraction.

With specific fiestas on Tenerife, there are usually lots of excellent smaller affairs, but there is nearly always one which draws more crowds, is bigger, more spectacular, more colourful, and has more historical significance. With carnaval it’s Santa Cruz, with firework displays it’s Los Realejos, with the Virgen del Carmen it’s Puerto de la Cruz. And with Corpus Christi and the laying of flower carpets associated with it, it’s La Orotava where alfombristas (carpetmakers) have been honing their skills ever since the noble female residents of Casa de Monteverde fancied doing something a bit different way back in 1846. 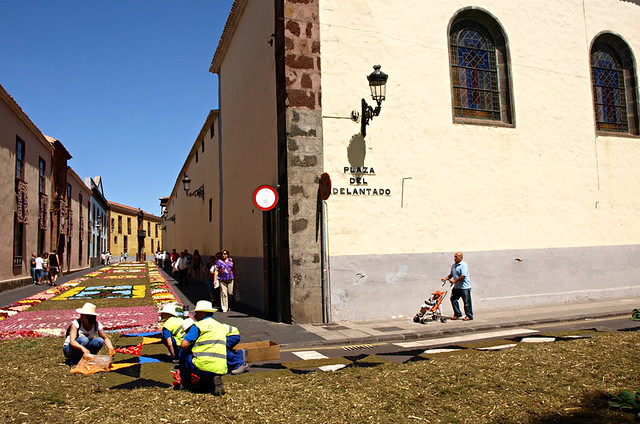 We’ve seen flower, salt and sand carpets in Tacoronte, Santa Cruz, Puerto de la Cruz and La Laguna. They’ve all been beautiful and the dedication in laying them shown by carpetmakers of all ages has been admirable. But the alfombristas in La Orotava are in another league. 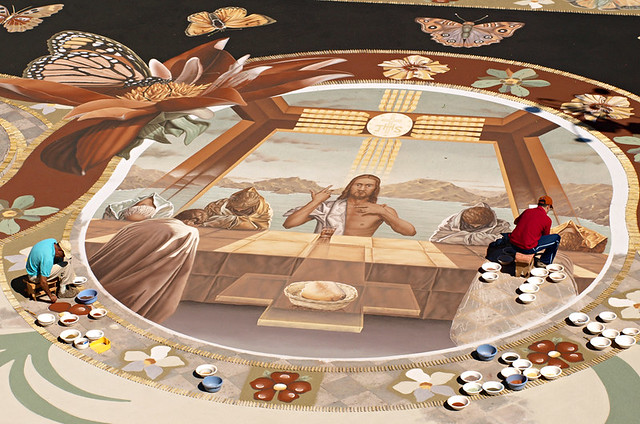 The sand tapestry laid in the plaza outside the town hall is an exceptional work of art year after year. Watch it being laid in the weeks before Corpus Christi and you know you’re seeing something special. It is pure alchemy how they turn grains of sand into a detailed masterpiece that conveys both a religious message and a humanitarian one. If you’ve seen these carpets first hand it’ll come as no surprise to learn these artists travel the world showcasing their skills. 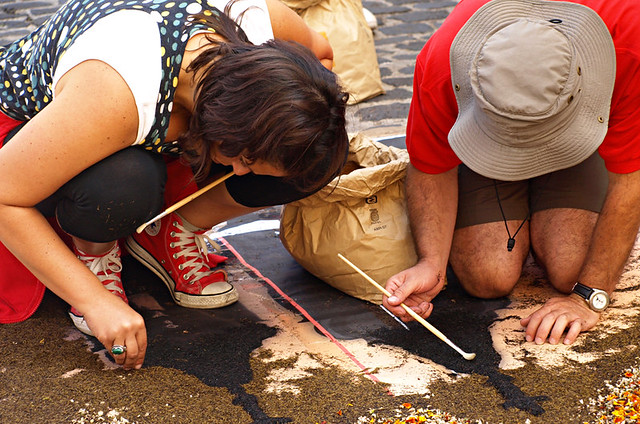 But it’s not just the sand tapestry alfombristas which raise La Orotava’s carpets to a higher plane than others. The families of alfombristas who create the flower carpets in the old streets around the town hall and the Iglesia de la Concepción are artists themselves. Observing how different members of a family contribute to the creation of a carpet is illuminating and as enjoyable as seeing the finished product. Some family members snip petals from branches; others lay out frames; ‘trainee’ alfombristas are tasked with filling out the easier sections of an image, the bits which involve a lot of moss and not a lot of detail, leaving the most experienced alfombristas in the family to complete the most intricate parts. Apart from the skills involved, what also sets La Orotava’s Corpus Christi carpets apart from many others is that the carpets are actually made from flowers and not salt. 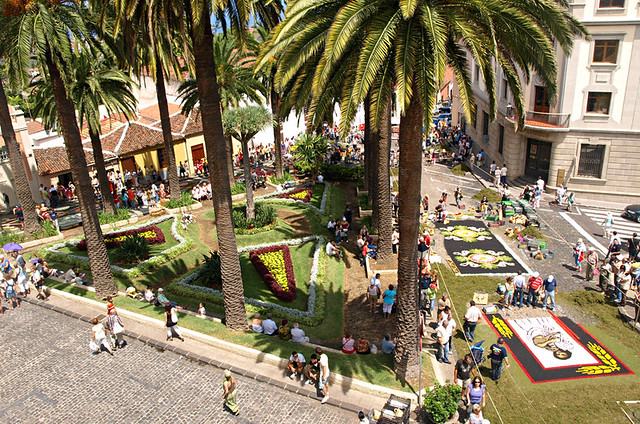 La Orotava’s flower carpets also benefits from having one of the most picturesque backdrops on Tenerife. Not only do you get those gorgeous colonial buildings, on a clear day Teide sits in the background. 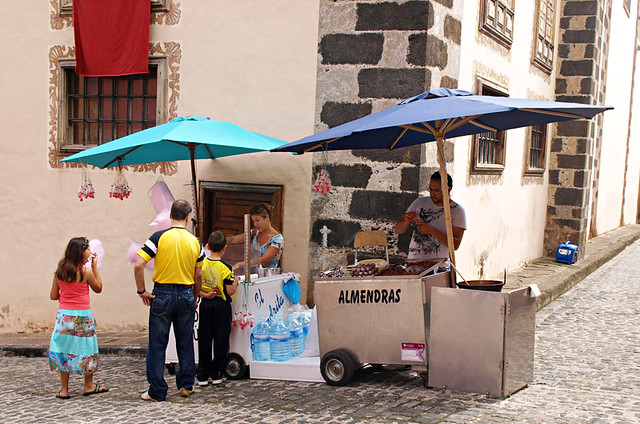 In addition to looking at objects which are as pretty as a particularly pretty picture there are other aspects which elevate Corpus Christi in La Orotava. Atmosphere is everything. It is the people who really breath life into fiestas. And La Orotava attracts them in their droves, from across the world. I found that out on my very first Corpus Christi when I was surrounded by an angry mob of Cuban exiles from Miami (long story). On the one hand the sheer volume of admirers can make the streets claustrophobic at certain times of the day, even though they add an infectious buzz. If you’re a festival veteran you know when to take time out from carpet viewing to head to the fringes to buy hot, sugared almonds from a street vendor, or to seek out a guachinche or shady tasca for wine and tapas. There’s as much a fiesta day buzz in the streets surrounding the ones with carpets, where you might bump into Galician pipers or fiestas beauty queens readying themselves for interviews or a photo shoot. 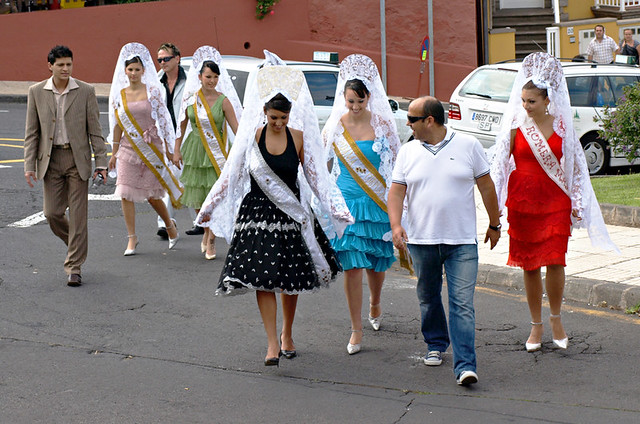 It is the combination of all these ingredients which make the La Orotava flower carpets the main attraction in Tenerife’s Corpus Christi calender. Thankfully most places wouldn’t be daft enough to try to compete, so the majority of other Tenerife floral/salt carpet displays take pace on the weekend before La Orotava’s. 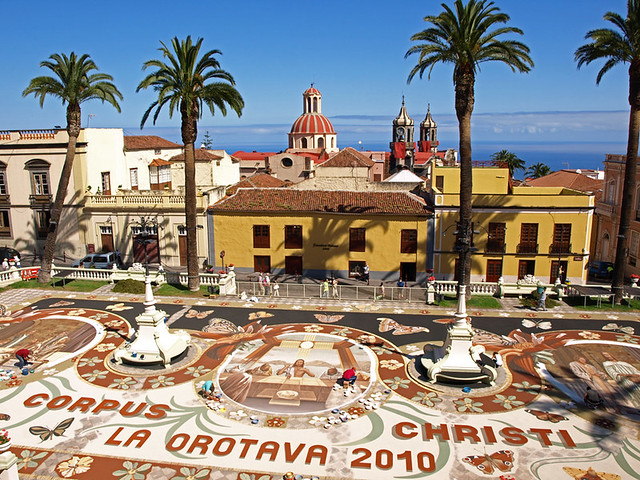 So, just as with the music festivals referenced at the start, you get to enjoy the warm up acts before the headline group takes centre stage.