Overall
There some four star hotels on Tenerife which really should be described as four star plus. The award winning Riu Garoe in Puerto de la Cruz is one of them. It’s in a superb location boasting some of the best views you’ll find from a Tenerife hotel, has exotic subtropical gardens, and is just a really nice place to enjoy a bit of R&R. 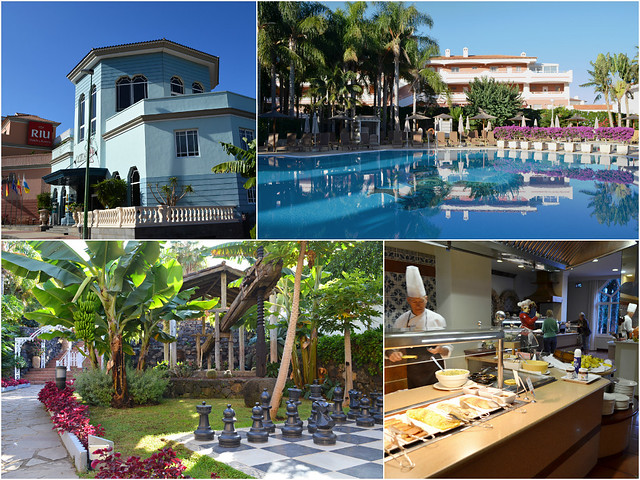 Where is the Hotel Riu Garoe?
The Riu Garoe sits on the edge of the quiet La Paz residential area above Puerto de la Cruz. At first it might seem as though that’s a disadvantage, but it means you get uninterrupted views along the north coast and of the northern slopes of the Orotava Valley. Town isn’t as far as it might seem, a 10 minute walk takes you to a wonderful coastal path which hugs the cliffs before descending into the centre of Puerto de la Cruz. In the opposite direction beyond the banana plantations is Playa Bollullo, our favourite remote beach on Tenerife. There are some excellent restaurants a short walk away in La Paz itself where there are also supermarkets and the famous Botanical Gardens.

What is the Hotel Riu Garoe like?
The Riu Garoe is a bit like the Tardis, it doesn’t look that big from its discreet, powder blue entrance. But it stretches some way down the hill toward the coast. The style is demure colonial with various wings being honey and taramasalata coloured as well as the same powder blue as the entrance. The Riu Garoe manages to be both modern and feel traditional at the same time, thanks to features such as airy interior courtyards surrounded by wooden balconies. 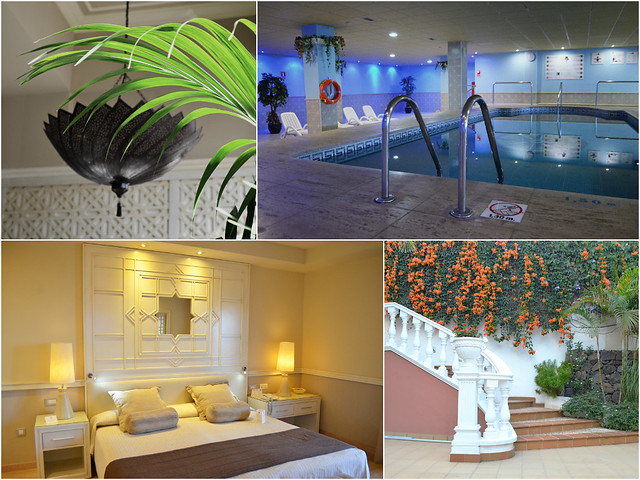 The main courtyard area, where the heated swimming pool is located, is lush and full of tropical flora. The gardens full of palms, bananas, birds of paradise plants and profusion of bougainvillea are a joy to wander. There are distracting little corners where you might discover an old lagar (wine press) or a stone yam fountain. I love the fact gardeners have allowed vines to wrap their branches around a concrete walkway. It makes the walkway look far more natural, almost as if nature is claiming the place back.

As well as reading rooms and lots of intimate areas with rattan furniture and ‘wow’ views, there are facilities for the more active minded. These include a gym, squash court, tennis court, giant chess set, mini golf and a Canarian wrestling ring. The last doesn’t get used much. Although not a family hotel as such, there is a children’s playground. There’s also a rather attractive spa with a heated indoor pool.

During the day, drinks and snacks are served at the poolside bar and terrace. At night the action moves inside to a bar which looks as though it could easily be located in Raffles Hotel in Singapore. 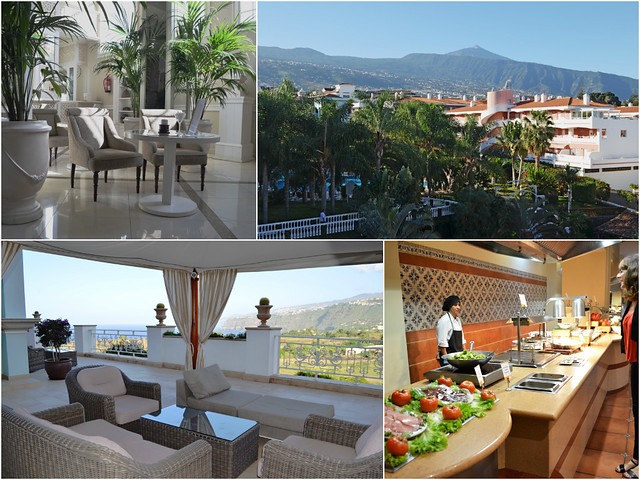 What are the Bedrooms Like?
There are 190 bedrooms, best of which are the suites on the upper floors. Like the rest of the hotel the rooms are tastefully decorated, generally biscuit and mahogany colour schemes broken by the occasional splash of colour from flowers or prints on the wall.
All rooms have bathrobes, mini bar, air conditioning, flat screen TVs with a handful of British channels, free wifi and a balcony with sea or mountain view. This is one of those rare locations where the mountain view is actually far more impressive than looking out to see. Saying that, the balconies which include vistas along the dramatic north coast aren’t bad either.
Bathrooms are modern and well equipped with bathrobes, hair-dryer and toiletries. They have his ‘n’ her sinks. Ours had a large walk in power shower; some have bathtubs.

All in all the bedroom was an extremely comfy and pleasant place to relax.

How Good is the Food?
Dinner and breakfast are served in El Rincón restaurant. Although dinner is buffet style, there are themed dishes and chefs prepare a variety of meat and fish dishes to order. The food was of a very good standard; fresh and hot. We couldn’t see how even the fussiest of eaters could moan there wasn’t something to suit. As well as the freshly cooked meat and fish, there was a carvery, pastas and pizzas, Chinese, Spanish and international dishes. 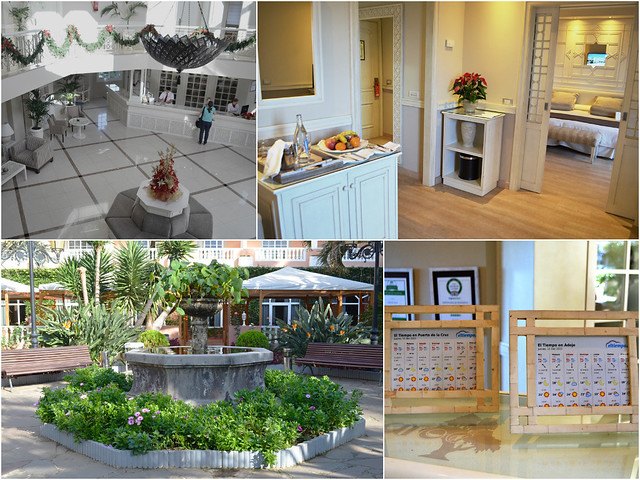 There are two sittings for dinner. One for those who prefer to eat late afternoon (i.e. from 6pm) and the other for those of us who like to eat later (from 8pm). It’s a system that works well as some northern Europeans are early diners. Make sure you let reception know which you’d prefer as even the second sitting was very busy when we stayed.

Best place to sit is in the annex to the main dining room as you get the sun rising over the northern hills and views along the coast.

What is the Best Thing About the Hotel Riu Garoe?
Apart from the hotel exuding a wonderfully soothing atmosphere, the gardens were the most delightful aspect of the hotel for me, I loved just wandering around spotting different plants and features. They reminded me of hotel gardens in the Far East. The location is quite a stunner as well.

Who Would it Suit Best?
Couples of all ages, especially people who appreciated scenery and like to explore and experience traditional areas rather than purpose built ones.

How the Locals Deal With April Rain on Tenerife

I’ve already used this image on this week’s weather forecast on walkingtenerife.co.uk but although it’s not a brilliant shot I love what it says about the people of Puerto de la Cruz on Tenerife. […]