How can you easily spot the difference between a Tenerife town,  or any Canary Island town, which has a strong local community and one which doesn’t?

By the plaza… or lack of.

There are lots of other ways of course, but the presence of a bustling plaza where families meet, greet and have a good time is a sure-fire way to tell you the town you’re in is a traditional one.
Some plazas are busier than others, some are more historic than others, some have more charm and some are definitely far prettier than others.

These are our personal favourites. 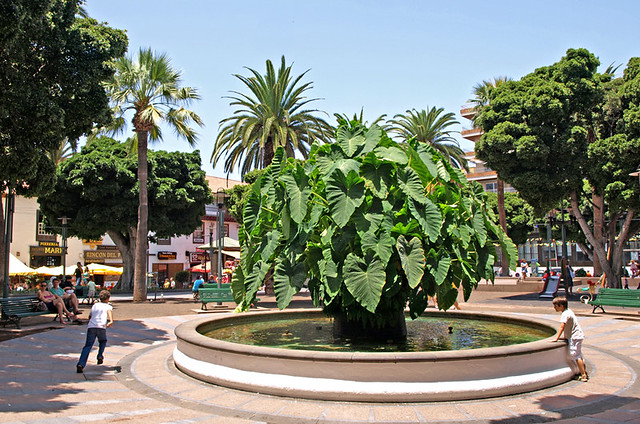 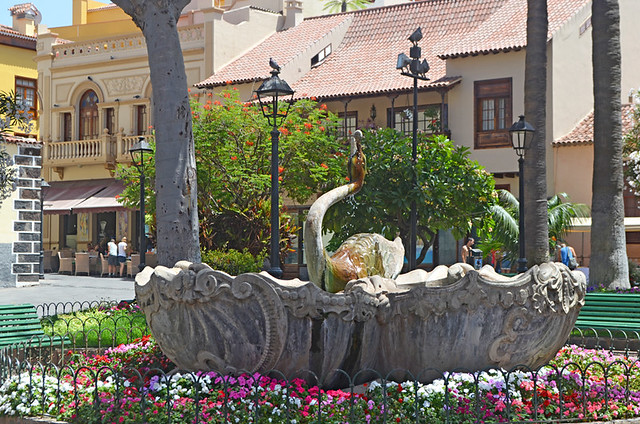 Plaza de la Iglesia, Puerto de la Cruz
Maybe we’re biased, but Puerto has more than its fare share of picturesque plazas. In some ways Plaza de la Iglesia with its swan fountain, flower beds and the church it’s named after is a bit more elegant than nearby Plaza del Charco. The regular weddings which take place here add glamour to the historic setting. 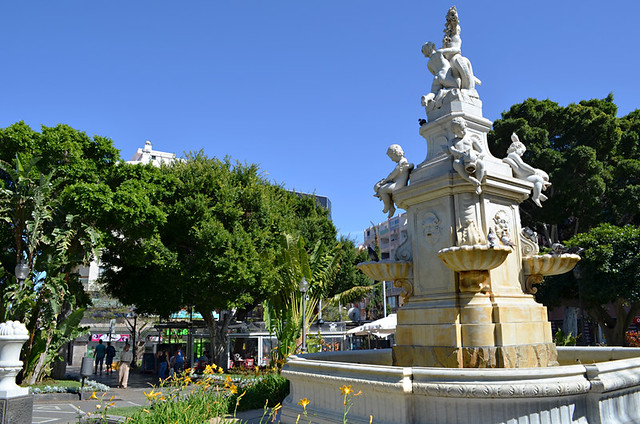 Plaza Weyler, Santa Cruz
There’s something rather grand and possibly even a bit pompous about Plaza Weyler, possibly thanks to the official buildings which border part of it. But it’s a beautiful old square with an impressive marble fountain centrepiece. Despite its size, being located a decent walk from the seafront it feels like it’s tucked away. 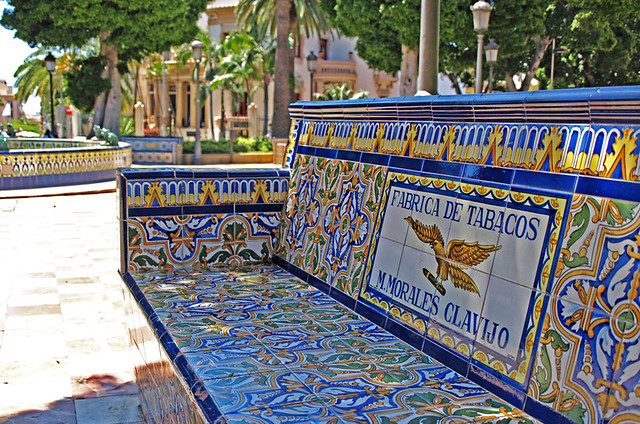 Plaza de los Patos, Santa Cruz
Officially known as Plaza de 25 de Julio, we prefer its common name, Plaza de los Patos. It’s hardly a bustling plaza, we never see more than one or two people, but it’s a sweetheart of a plaza thanks to the fountain, a replica of the frog fountain in Seville, and its fascinating tiled benches illustrating adverts from the city’s past. 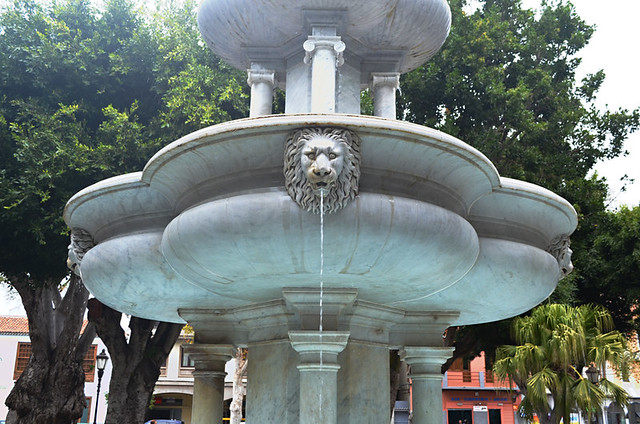 Plaza del Adelantado, La Laguna
There’s no doubt Plaza del Adelantado lost some of its charming bustle after the agricultural market moved to Plaza del Cristo, but it’s still a stunner of a square, surrounded by wonderful architecture including the latticed, closed balcony on the tower of the Santa Catalina Convent, stone arched walkways and Gothic mansions. 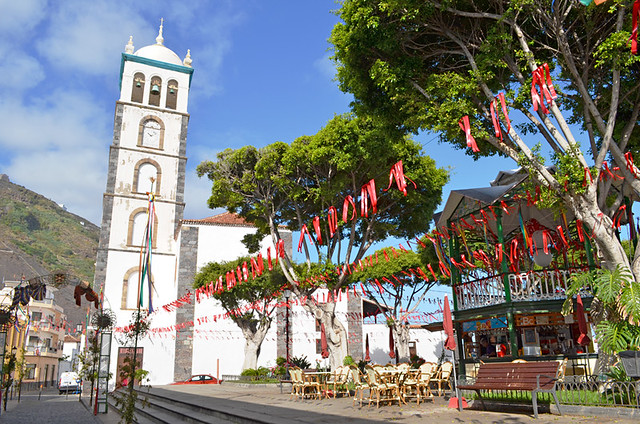 Plaza de la Liberdad, Garachico
Our second favourite square on Tenerife. It is simply the most beautiful plaza we’ve seen anywhere on the Canary Islands. Churches, palms, bay trees, a bandstand, elegant colonial buildings, men arguing over dominoes and a freedom fighter. It’s got it all. 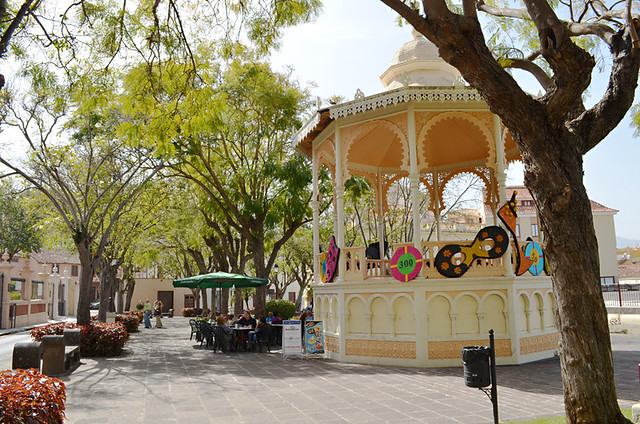 Plaza de la Constitución, La Orotava
The plaza in front of the town hall in La Orotava may get all the attention when it’s covered by a sand tapestry during Corpus Christi, but it doesn’t have the same charm as shady Plaza de la Constitución. Although it’s pretty there’s nothing particularly ‘wow’ about the plaza. But it does have that sophisticated and appealing quality which sets La Orotava apart from every other town on Tenerife. 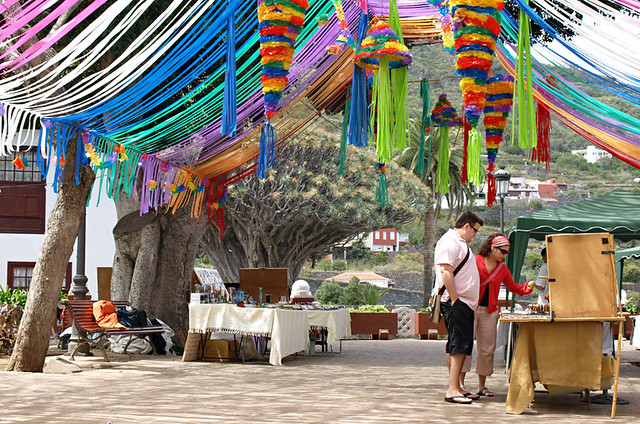 Plaza de la Constitución, Icod de los Vinos
Another stunner of a plaza with quasi-botanical gardens, fountains, a church, bandstand café and the best views of the Millennium Drago Tree. The only downside is it gets very busy with people on coach excursions which can dilute its personality a bit. 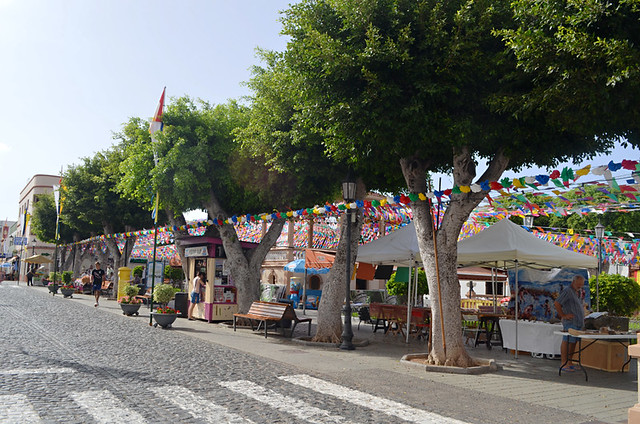 Plaza de la Luz, Los Silos
We like Plaza de la Luz a lot because of its understated charm. Los Silos has always held a slight Bohemian air for me. Maybe thanks to events like its storytelling and neo-hippy whale festivals. Whatever the reason, it’s a lovely little square and they serve sensational fresh fig tarts at the bandstand café. 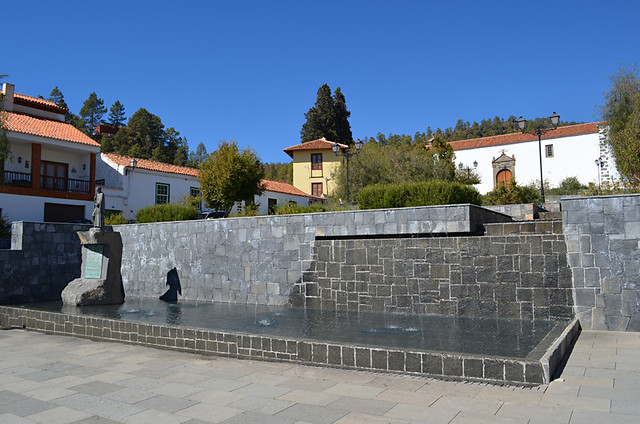 Plaza Doctor Pérez Cáceres, Vilaflor
A forest setting, Tenerife’s only saint, trickling fountains, a lovely old church and a bar from which to enjoy them all; Vilaflor’s plaza is a relaxing spot to sink a beer after a stroll in through the pines.

There are plenty of other pretty and peasant plazas all across Tenerife. we like them all. We simply enjoy the life you tend to find in plazas, both old and new.

However, the ones listed all have aspects that make them stand out from the crowd, whether it’s their tangible Canarian atmosphere, the subtropical plants which provide welcome shade, or the sense of history which oozes from the buildings around them.

Have You Tried Rancho Canario on Tenerife?

It sounds like something to do with horses but the only connection rancho Canario has with horses is you need an appetite like one to eat it. […]

Picking at the good and bad of hotel buffets on Tenerife

We’ve lost count of the number of hotel buffets we’ve tried on Tenerife. The okay ones melt into one inoffensive blur, difficult to distinguish one from another. However, the really good ones stand out… as do ones which had me struggling to choose anything which looked remotely appetising. […]