Some of the most interesting restaurants on Tenerife lie off the beaten track. Tacoa Cerveceria in El Sauzal is one such example. Not only is it unusual in that the food is a Spanish/German mix, it’s a mini Mecca for ale lovers – not something that’s common in traditional Tenerife areas. As a glistening cherry on the cake, it’s an extremely rare creature on Tenerife as it is also a micro brewery with its own range of artisan beers. That alone makes it worth a visit. 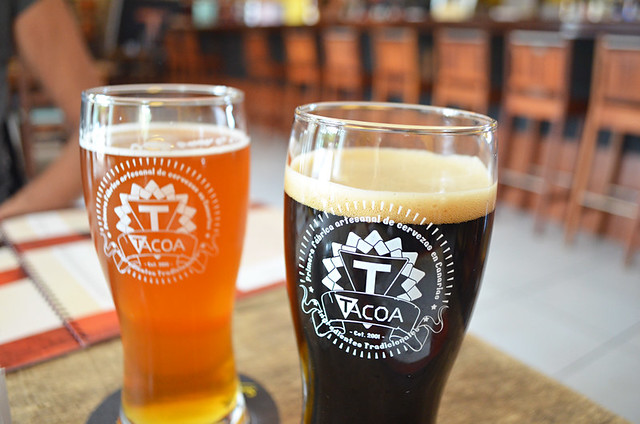 It lies on a road less travelled between Tacoronte and El Sauzal. Most folks whizz by on the TF5 which runs above the old road. From the outside it’s an unassuming building, so even if you drove past you might not give it a second glance.

We’d been meaning to visit again since we merrily tested a range of their beers at the Pinolere craft fair in September 2015. A long and unusually hot January walk in the forests above Tacoronte left us thirsty and hungry mid-afternoon looking for somewhere nearby to refuel. The meaty burgers at La Oficina were pondered before I remembered Tacoa. 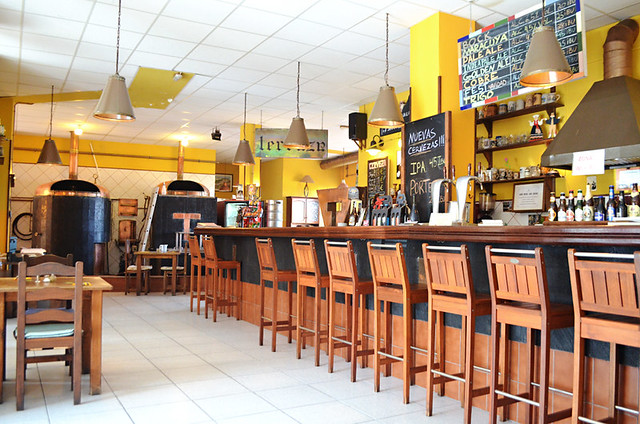 The décor inside Tacoa is typically tasteful Spanish tasca with an overwhelmingly apparent love of beers evident in the prints on the walls and various curios dotted around. The gleaming black and copper vats where the ale is brewed are a giveaway it’s not the usual quaint and homely tasca.

There’s a small roadside terrace and another at the rear with typical ‘wowser’ El Sauzal views along the north coast. As we’d had enough sun for the day, we opted for the cooler interior. One look at the menu and I knew what I was having. Picking a beer to accompany it was a different matter altogether. 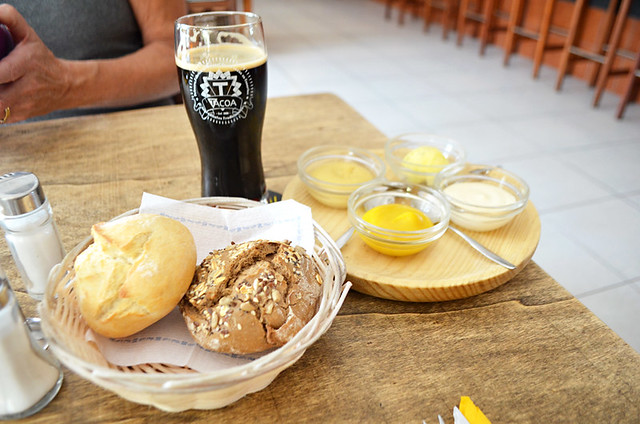 The Food and Beer at Tacoa
It’s difficult to choose from beers which include blondes, pale ales, black beers, beer with a hint of tajinaste honey, beer with the essence of banana or even fiesta beer with flavours to evoke Christmas cheer (cinnamon) and summer smiles (cherries).

Being only recent converts to proper beer, we let owner Jochen advise us; Andy ending up with a light and summery Indian Pale Ale and me with a dark and moody Porter – both tasty reminders that our years spent drinking lager were ones of wasted opportunities.

As for the food, although there are plenty of Canarian/Spanish options (croquettes, revueltos, salted cod, cherne, gofio amasado etc.) we were there for the beer and sausages. In my case a metre long monster (a doggy bag was offered before I even started) with fried potatoes. In Andy’s, a more conservative brace of different German sausages with side salad and French fries. 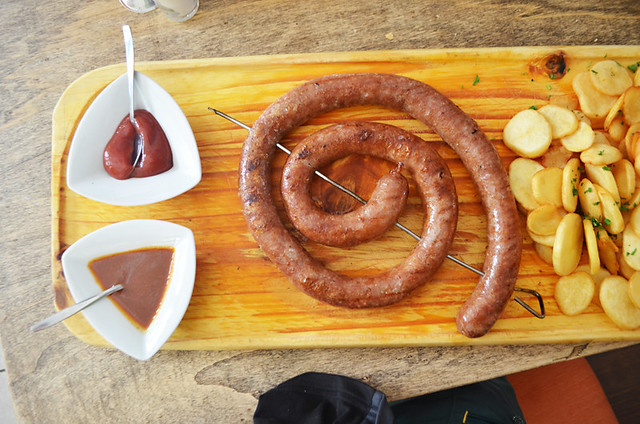 By the time they arrived we’d already given in too much to a couple of hot rolls with a selection of mayonnaise, flavoured butter and mustards. I know the mustard was probably for the sausages but we got caught up in a dipping frenzy.

I’ve read a couple of mixed reviews on Tripadvisor and wondered what the hell some people were on about. A Spanish reviewer complained the sauces are too strong. For them maybe, but not for palates which are used to food beyond the Canary Islands. A British reviewer commented they weren’t sure what the Spanish element of the menu was which said more about their lack of knowledge regarding what traditional food on the island consists of. One complained of a lack of atmosphere so they didn’t eat there. They visited at 5pm. Thankfully most people appreciate they are experiencing something different. 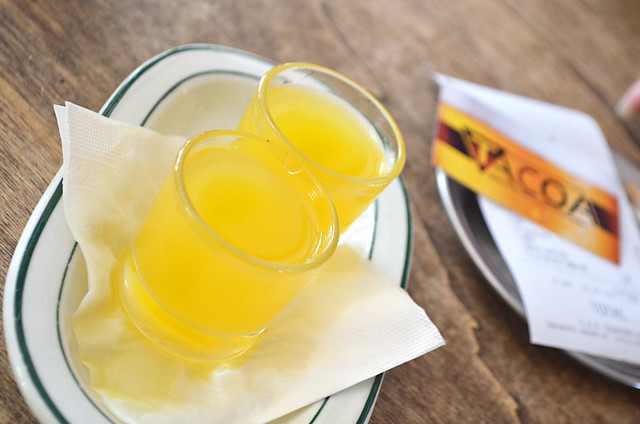 For us, the food tasted exactly as we’d expect from a good restaurant specialising in German and Spanish food. The smokey meaty flavours of the sausages transported us back to recent visits to Bavaria and the Black Forest. Nothing fancy, just nicely prepared hearty fare. So hearty Andy couldn’t finish her chips and I couldn’t get through my fried potatoes – which was tragic.

We did manage the complimentary passion fruit chupitos (shots) which rounded off our late lunch nicely.

We’ve met the Spanish side of the team, Teresa, before; most recently at Pinolere. This time it was Jochen who regularly checked everything was okay, we were enjoying the food and whether I had the stamina to see off a metre of German sausage. I did, but only just and I didn’t each much at all for dinner later.

Tacoa is a friendly restaurant, a place to relax and enjoy authentic German and Canarian dishes (many ingredients are sourced locally) and wonderful home brewed beers. For us the visit did, however, undo all the morning’s work which was supposed to help counter some of the excesses of the Christmas period.