Tripadvisor you little minx. We’re standing at the address shown on the travel advisory website for Restaurant Solana and facing us, instead of a restaurant, is a partly demolished building.

We grab the first passer by we see. “Ah, Solana has moved,” he states the somewhat obvious. In typical friendly Canarian fashion he motions we should follow him to the new location. Unfortunately the restaurant he thought was Solana isn’t Solana. We return to our phones and check if there are any websites with a more accurate address. We find the new location. It’s not exactly on the opposite side of the city, but Google Maps tell us it’s a good 25 minute walk from the backstreet we’re on. 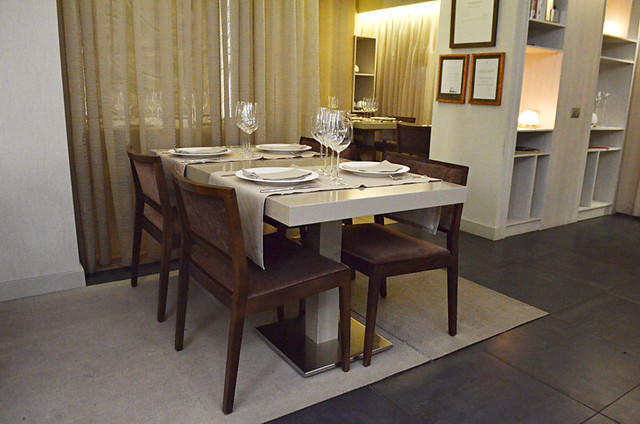 It takes us 15 minutes and we’re a bit sweatier than we’d like to be to grace Solana’s elegant seats. After the faffing about, we’re also half an hour later than planned. But it’s a Tuesday night. Santa Cruz is quiet and there is only one other couple in the restaurant.

The décor is sophisticated and fresh – pale gold drapes, oatmeal napkins, chocolate coloured chairs, it’s all very Zara Home. Solana is one of the modern breed of Canarian restaurants serving cuisine that has its roots in tradition but with a creative construction which is unmistakeably 21st century. The type of restaurant where you instinctively know espuma of something will be on the menu. 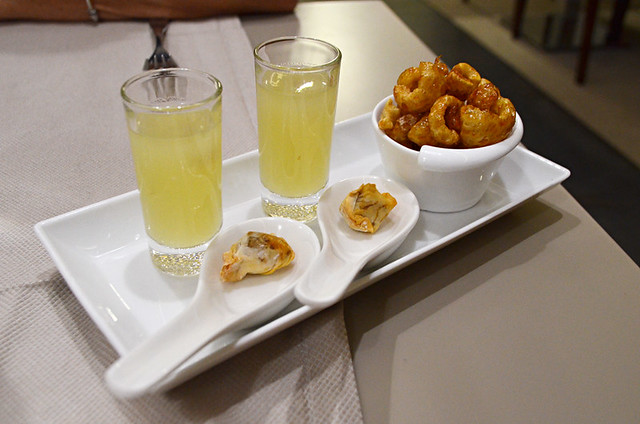 The menu arrives pronto. For a change we decide what we’re going to eat after barely a glance. The degustación (taster) menu is €36. It’s too good a deal to let pass. We order two and a bottle of Canarian red.

The Food at Restaurant Solana
The amuse-bouche arrives equally quickly; a trio of goodies, including bite-sized savoury parcels, to get the juices flowing and give a teaser of the creativity to come. 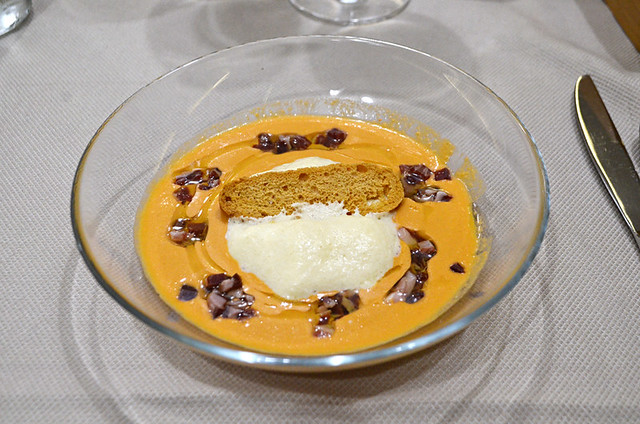 The first offering from the taster menu is a cool, tangy, salmorejo with jamón ibérico. It’s a good dish for a sultry summer evening. My only criticism is that the portion is on the big size for a taster menu, especially with six more courses waiting in the wings.

The follow up micro-salad of octopus, flower petals and salad leaves is light and delicate; the octopus nicely tender. 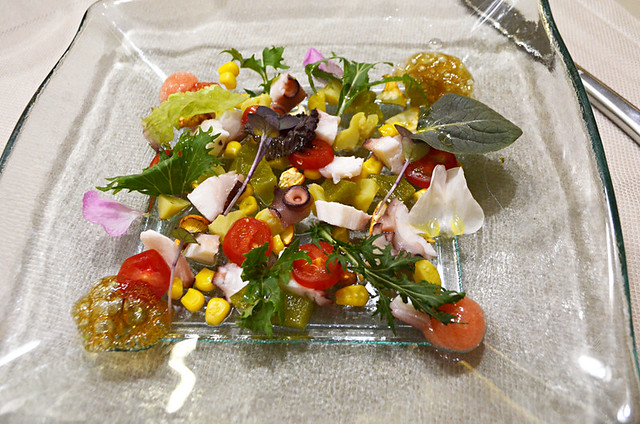 Next up is a burrito with scallops, Thai vegetables and chop suey. It’s a busy little dish which has plenty of flavour but doesn’t quite work for me. I love scallops but in this case the chop suey sauce overpowers their natural flavour.

Almost as soon as the scallop burrito is scoffed, another dish arrives. I guess the prompt serving of each is down to Solana being quiet. But we like to have a breather between courses, especially when it comes to taster menus where pacing yourself is essential to appreciate the rainbow of flavours you’re invariably presented with over the course of an evening. 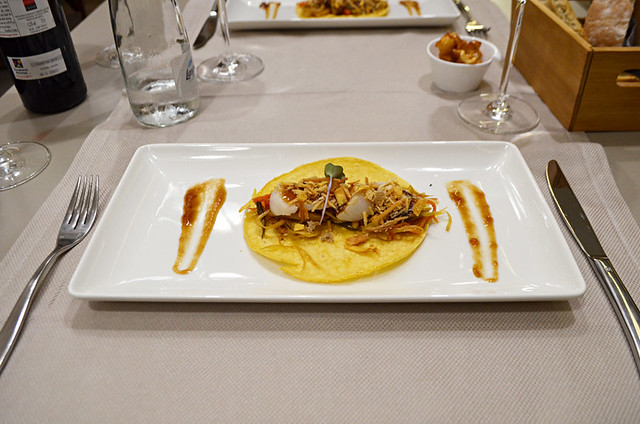 It’s a bit of a ‘wowser’ though – cherne albóndigas in a coconut sauce and connected by a herby churro bridge (as cherne is wreckfish, in this case the albóndigas are fishballs rather than meatballs). The combination of flavours launch a serious assault on the tastebuds. This is a great little dish. 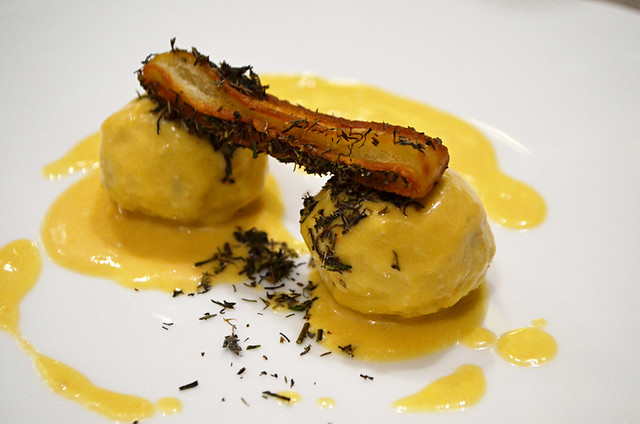 By now we’re reaching the ‘feeling full’ zone. With taster menus, usually after the fish and seafood section of the menu is over you get the meaty part which just happens to also be a bit more on the heartier side. Solana’s is no different – a mini chop on a bed of potatoes, bacon, smoked cheese and membrillo (quince) jam. It’s salty and savoury and would make an exceptional brunch. I’m just too stuffed to fully appreciate it. 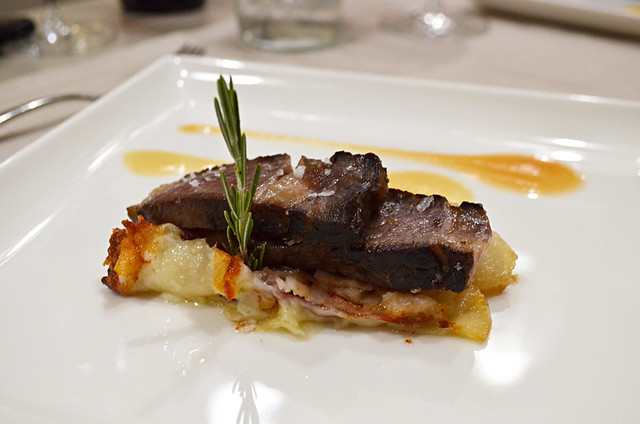 The penultimate offering is a melon, apple and passion fruit sorbet – a much needed freshener. It is icy cold and brings on instant brain freeze. I’m no longer feeling sluggish from overeating.

However, I still struggle to see off the final dish which is Solana’s take on an apple pie, with vanilla ice cream and cognac flavoured fig jam. 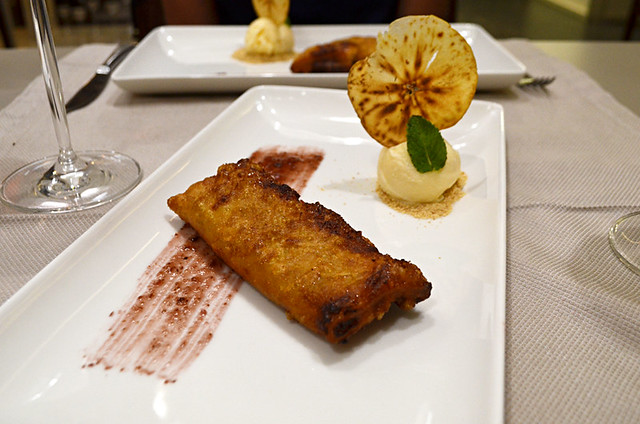 I’m thankful we’ve got a 25 minute walk back to the hotel, it will help counteract the effects on the stomach of what has been one of the more generous taster menus we’ve enjoyed on Tenerife.

It’s clear Solana is aiming for Michelin standards. The food is interesting, tasty, inventive and up there with the better restaurants on the island. But a bit of work on the overall balance and pace is still required.

The bottom line is that €36 is exceptional value for the quality and quantity you get with Solana’s taster menu.

Glamming Up for Tenerife’s Beauty Contests

Just about every fiesta requires a fiesta queen, so each town may end up having a few queens over the course of a year. Additionally every town on Tenerife that holds a carnival will… […]