A young lad somersaults through the air and whacks into a mountain of tyres.

“Pah,” the slightly drunk man beside me exclaims dismissively. “When I was young I came down so fast that when I hit the tyres I flew over them and landed face first on that pavement.”

He points to the concrete slab behind us. It sounds like an exagerration; a cartoon type collision, but his bent nose and lack of teeth suggest that some time in the past his face had indeed lost a fight with a hard object. 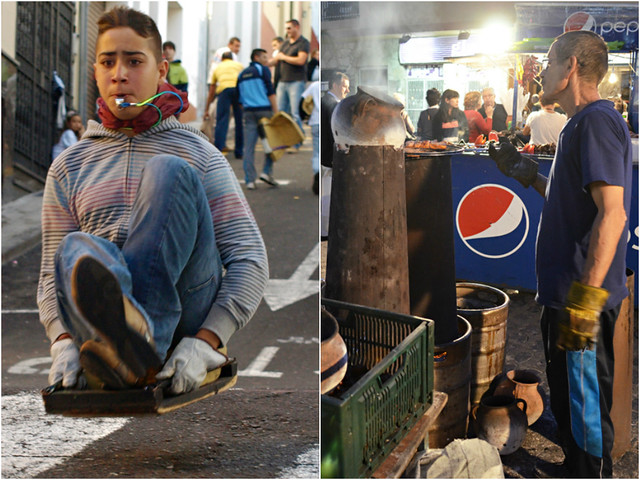 The Arrastre de las Tablas in Icod de los Vinos
The Fiesta de San Andrés (Saint Andrew) is celebrated across Tenerife on the nights of 29 and 30 November, but the tradition is strongest in Puerto de la Cruz and Icod de los Vinos. Any authentic San Andrés celebration on Tenerife should involve new wine and roasted chestnuts, but both Icod and Puerto spice up the wine and chestnuts with slightly mad extras. In Icod de los Vinos this involves local lads and girls sitting on wooden and metal sleds and launching themselves down nose-bleed steep streets where the bravest (craziest) end their journey by crashing into a mountain of car tyres. If you’re wondering what the connection between wine and street sledding is have a read of Riding the Boards for San Andrés in Icod de Los Vinos.

Anyone expecting a colourful fiesta whose edges have been smoothed down to accommodate tourists might be in for a bit of a surprise. It is friendly, everywhere is on Tenerife,  but it is also all a bit mad Ted, as Father Dougal might have once said.
The lads look like Tenerife’s equivalent of chavs (looks can be deceptive) and there’s a lot of drinking goes on which can mean the later it gets, the crazier the street sledding becomes. That might seem stating the obvious for a festival built around the season’s new wines but I’ve known some first timers be surprised by the rawness of it all and feel slightly uncomfortable. There’s no real reason to be, but the arrastre de las tablas is a gritty, no frills shebang. 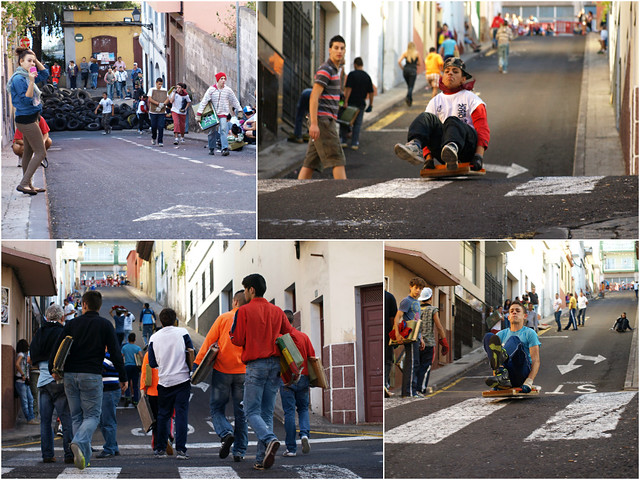 If you go along not expecting a sanitised affair, down the wine with mucho gusto, munch chestnuts and whatever else is on offer from the stalls set up outside bars and cheer on the downhill racers with the locals, it’s great fun… as long as it doesn’t rain; always a late November possibility.

Fiesta del Cacharro y la Castaña
The celebrations in Puerto de la Cruz aren’t quite as manic, but they are noisier as the correr del cacharro involves children dragging metal objects of all sizes through the streets to emulate wine barrels being dragged over the cobbles. Other, more fanciful stories claim the noise was to keep witches away, or that it was related to waking up a drunk St Andrew. But the wine barrel origins seems most likely.

Whilst the niños burst eardrums around Plaza del Charco, the best idea is to head to El Muelle (the harbour) where there is the more civilised tradition of drinking vino del país with a poke of castañas (chestnuts). The stalls are set up from the start of November and sell sweet potatoes, sardines and pinchos moruños (spiced meat on skewers) as well. In recent years a wine fair has been added with stalls from bodegas in the Orotava Valley offering wine and tapas. This year the wine fair is set up from 7pm on Friday 28 November. 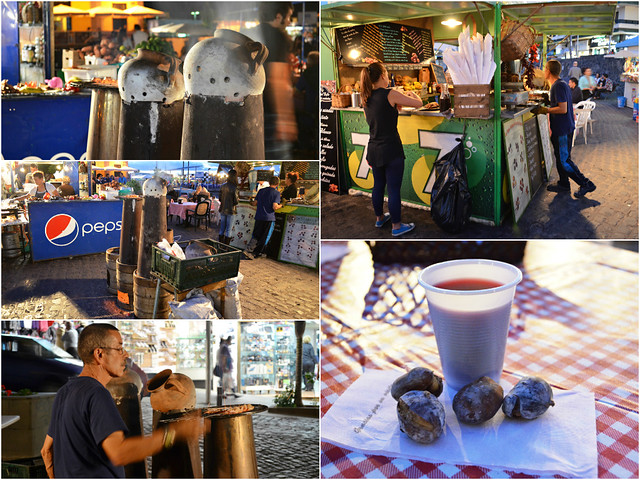 As well as being a tasty insight into authentic local life it’s a great opportunity to get to taste some truly local wines, some of which never appear on supermarket shelves.

As always we will be observing local traditions by probably drinking and eating too much… in the name of research of course. ¡Salut!