El Muñeco de Nieve may not actually be the ugliest, but it was recently voted as being in the top 20 ugly roundabouts in Spain. In fact whenever there’s a public vote about such things in Spain, El Muñeco often gets singled out for criticism.

The name might mean nothing, but when I explain it’s the snowman above the motorway between La Laguna and Santa Cruz then anyone who’s driven from north to south Tenerife should know exactly what and where El Muñeco de Nieve is.

Despite its apparent lack of popularity we like it. It’s a Tenerife eye-catching oddity. And despite having lost count of the number of times we’ve driven underneath it, I don’t even have one photograph of the thing. The trouble is any time we’ve passed it we’ve always been on the way to somewhere else. There’s no reason to detour other than to take a photo of the bizarre giant snowman in the sun. 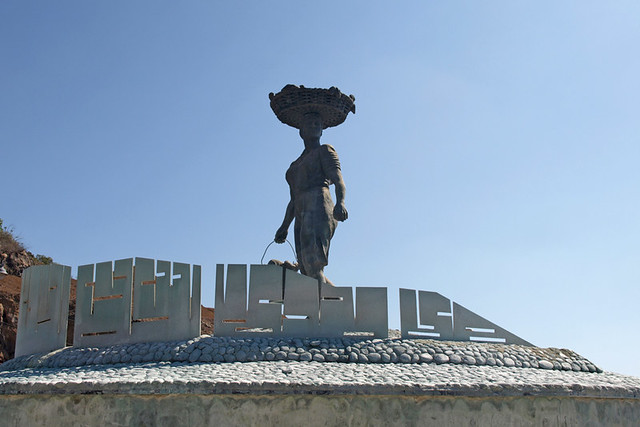 One of the reasons we like it is because we applaud anything that dares to be different. There are plenty of mundane roundabouts that would never register. A bit of imagination in their design makes them a feature rather than just another road planner’s toy to confuse a local population which is still getting to grips with how to deal with roundabouts. I used to think this just applied to the islands. But last year in the north of Portugal, not far from the border with Galicia, as we approached a roundabout where the car in front was in the wrong lane our taxi driver remarked “they’re probably from Spain, the Spanish don’t know how to drive on roundabouts.” 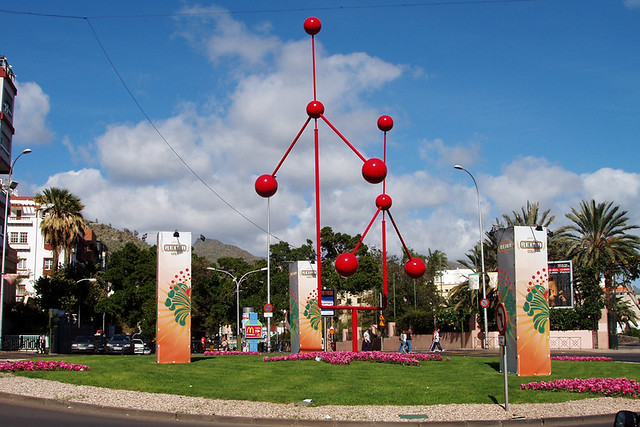 Tarting up roundabouts is not uncommon on Tenerife, or lots of other destinations for that matter. When done well it creates a feature which reflects something of the area. Alternatively, it can just look on the showy side, like the one at the entrance to Los Cristianos. But I’m biased against that particular roundabout with or without a sculptured fountain centrepiece – it’s a horrible roundabout to tackle. Far better in every way in my view is the simple fisherwoman between Los Gigantes and Puerto de Santiago.

Another I’ve never been keen on is Móvil by Francisco Sobrino, a work of art and part of the sculpture route along La Rambla in Santa Cruz. It just looks gangly and unattractive on a route where there are so many other striking sculptures. 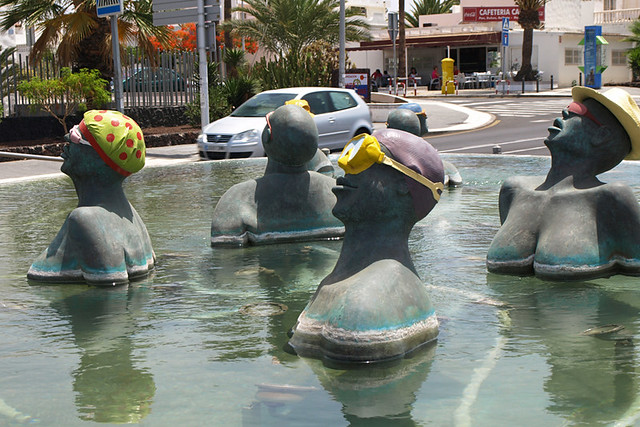 Some of my favourites aren’t in high profile spots, so remain unseen by many folk. The bathing tourists in Costa del Silencio isn’t liked by everyone, but I love its quirky whimsy.

One of my favourites is quite unassuming and is located in a residential part of La Paz. It’s more like a mini botanical garden with cardon, yuccas and agave. I’ve never been able to take a photo which does it justice. 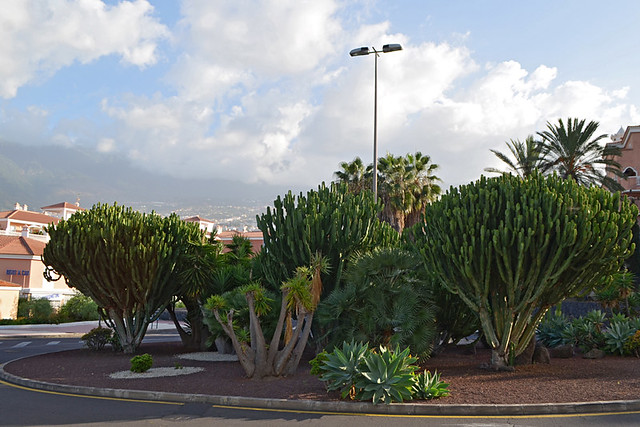 There are lots and lots of personality roundabouts across the island featuring fountains (Puerto de la Cruz once held a firework display to announce the completion of a new roundabout with a fountain), abstract sculptures, conventional sculptures, plants and flowers, and objects which are connected to past and present local industries.

The one which still stands out most of all, love it or loathe it, is El Muñeco de Nieve.