We’re big fans of getting to know sculptures in the places we visit. As well as usually being visually interesting, they often provide an insight into a location. I’m not talking about the grand monuments to famous historical figures. I’m talking about the ones which relate to obscure events, local heroes nobody knows about outside of their own town, or sculptures which are just downright bizarre.

I could write a list of a hundred Tenerife sculptures I like, but instead I’ll stick to the ten which top my list… at the moment. 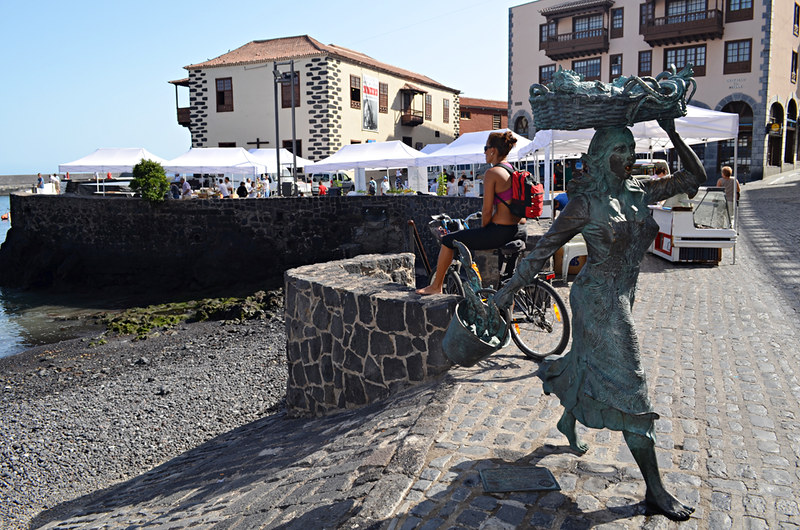 Created by my favourite Tenerife-based sculptor, Julio Nieto, the petite fishwife on the harbour in Puerto de la Cruz is just gorgeous , catching everyone’s eye as she strides barefoot across the cobbles, basket overflowing with octopus tentacles. It’s quite difficult to take a photograph of her on her own as there is usually a queue of admirers waiting to be snapped with her. 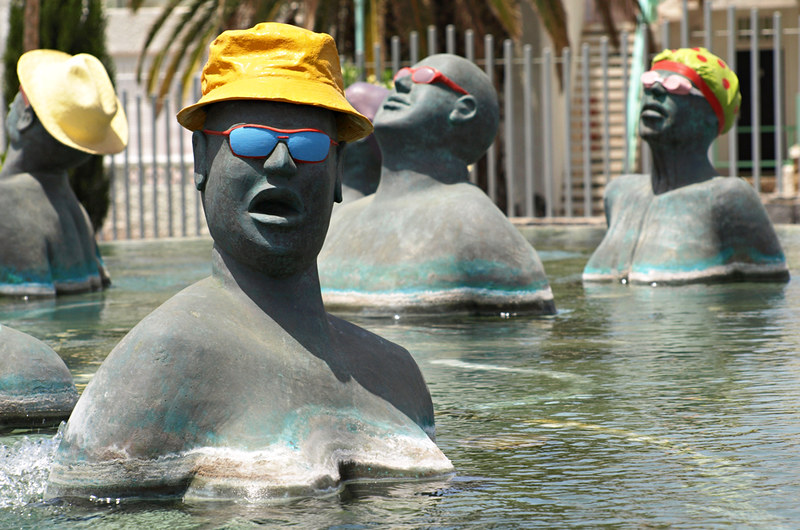 One sculpture which makes me laugh every time I see it is the posse of portly people wallowing in a fountain and searching the skies for the sun in Costa del Silencio. I know it wasn’t popular with everyone there when it was unveiled, but I love it – it’s bizarre, witty and maybe a bit cheeky in a mischievous way. 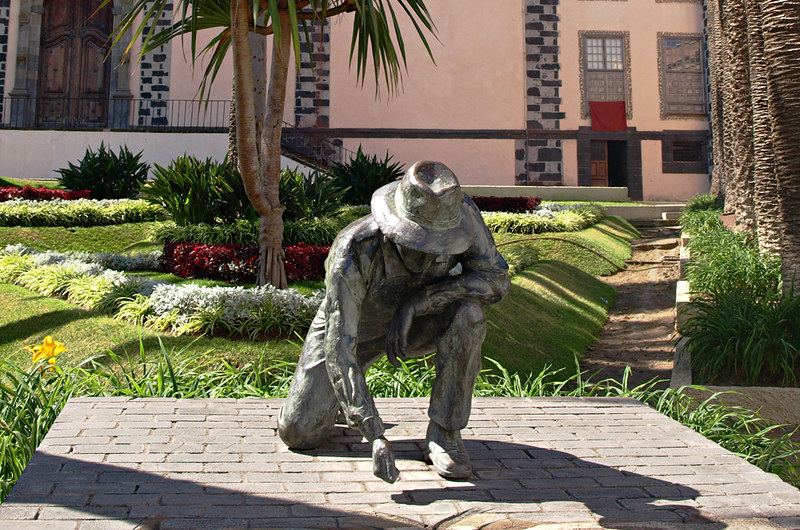 There’s nothing flash about the figure of a hatted man carefully placing something on the ground below the Iglesia de la Concepción in La Orotava. It’s just one of those sculptures which recognises the people who bring a special quality to the town, the alfombristas – the men and women who painstakingly create the sand and flower carpets which fill the streets with colour each Corpus Christi. . 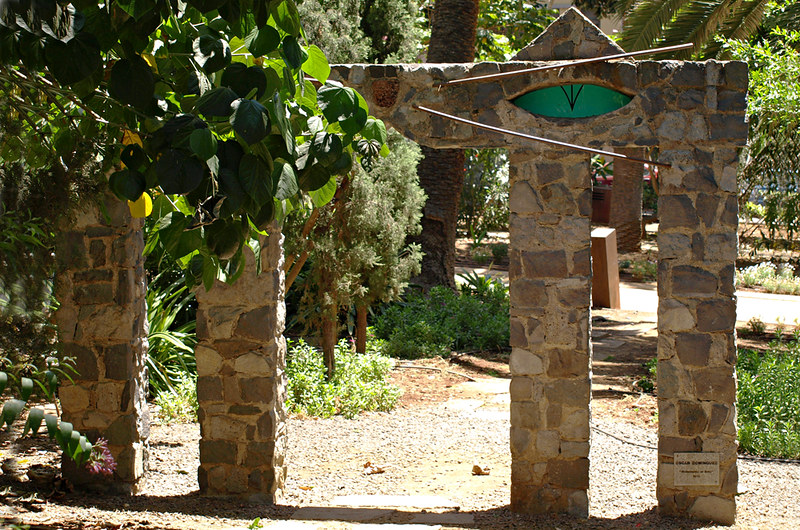 I could pick any number of wonderful works of art to be found in the streets and parks of the capital, but Óscar Domínguez’ Monumento el Gato (the cat) lurking slyly in the undergrowth in Parque García Sanabria is another which puts a smile on my face. Even though I know where it is, it takes me a while to actually track el gato down every time I visit the park. 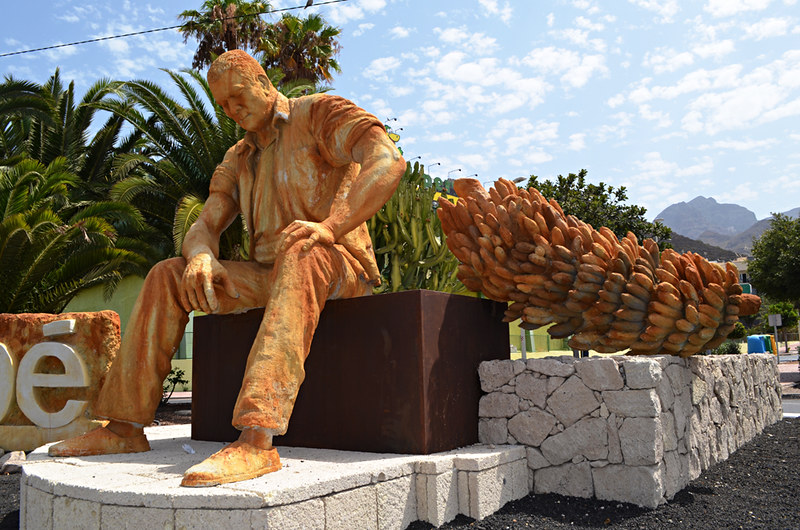 It was a surprise to see a sculpture dedicated to the island’s plataneros in one of the main southern resorts. When I think of banana plantations I think mainly of the north and west coasts. We live in a plantation and pass workers on almost a daily basis, the statue perfectly captures their weariness after they’ve been lugging around huge clusters of bananas all morning. 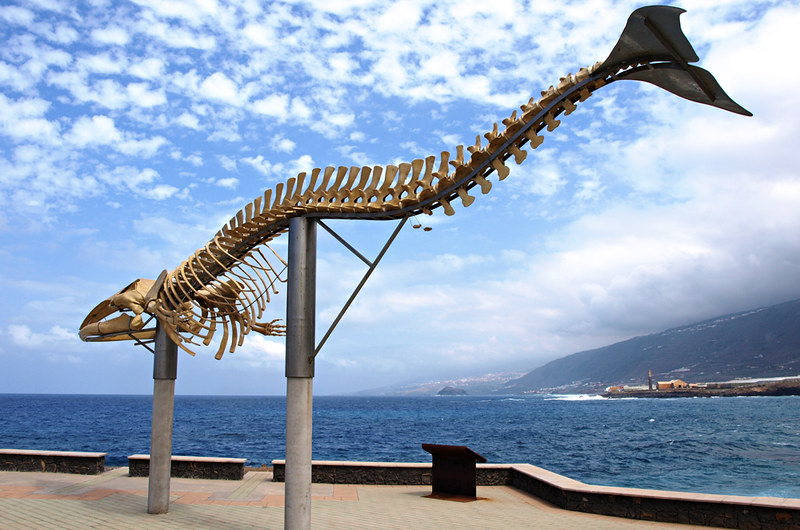 As well as showing just how big the whales which swim in these waters can get, the skeleton of a Sei whale on the coast at Los Silos is meant to signify a respect for the sea. Each September an environmentally themed festival is held in the area around the whale skeleton. 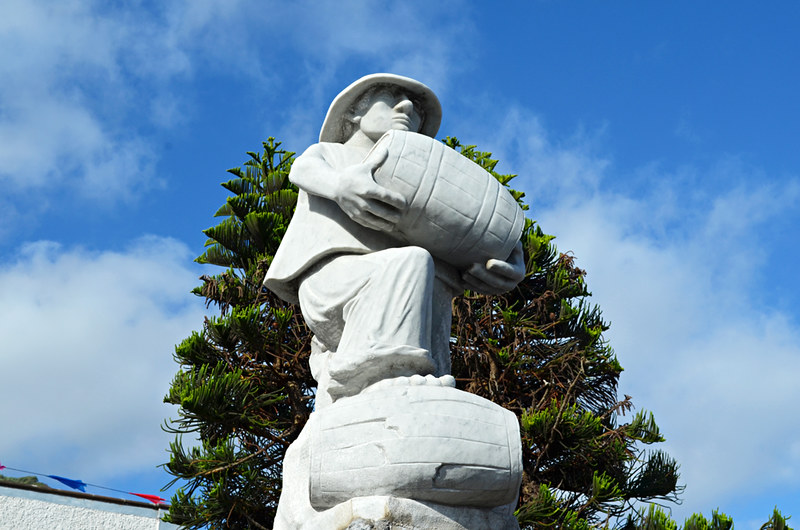 A man wearing what looks like a pith helmet and carrying a barrel is a reminder of a time when an uprising in 1666 led to Garachico’s streets running red. Thankfully not with blood but with wine after locals, protesting against an English monopoly which was keeping prices down, launched an assault on the town’s bodegas where British merchants were stockpiling vino. I like it because it represents the little person taking on big business and winning. 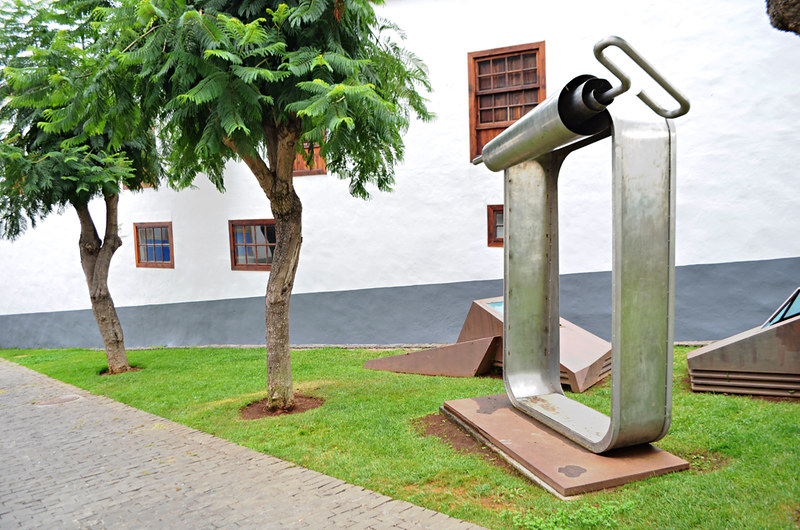 The first time we saw this over-sized sardine tin it was acting as an entrance to a house in La Laguna, the birthplace of famous surrealist painter Óscar Domínguez. Sardine tins of this sort featured regularly in his work and there are a couple of places on Tenerife where they’ve been used to commemorate Tenerife’s most famous artist. Dominguez’ birthplace is now a bank and his sardine tin entrance sits beside the church in the old quarter of Tacaronte, the town where he was actually raised. 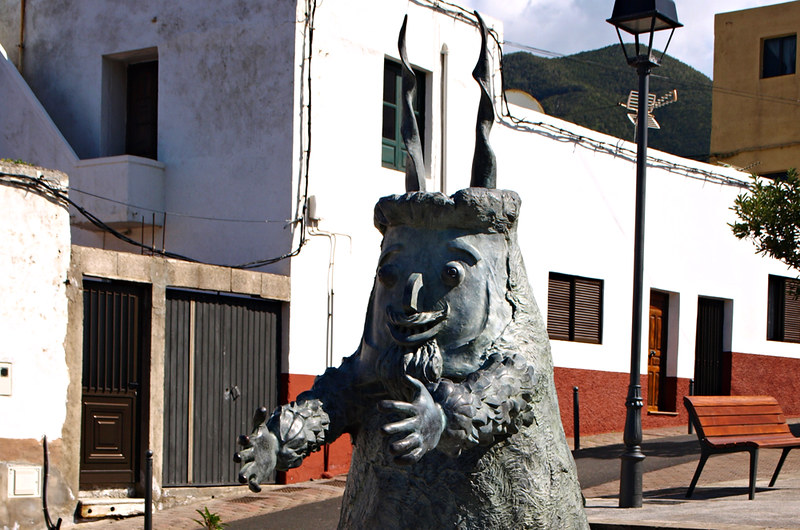 Another of the bizarre varieties and one which relates to an odd local tradition in the small agricultural community of El Palmar where dancing devils with firecrackers exploding from packs on their backs chase locals around the plaza. It’s far safer to get close to the metal version of one of the devils in the small park near the centre of the village. 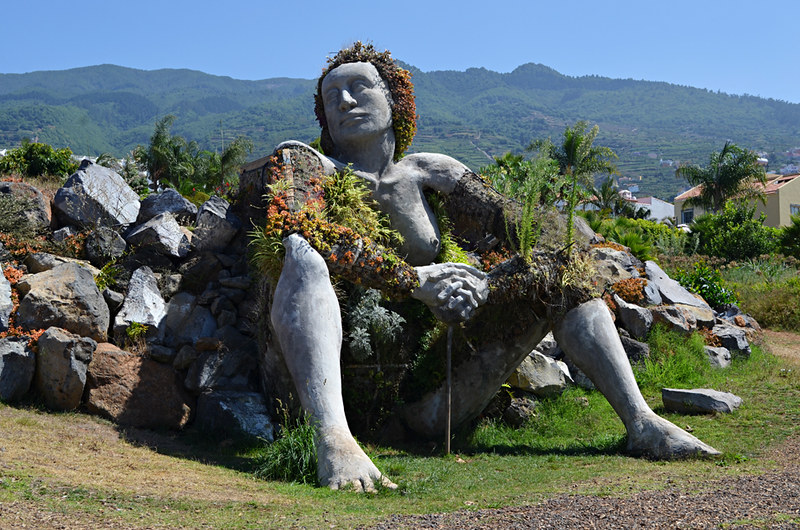 My current favourite Tenerife sculpture is this quite enchanting giantess sitting serenely in a small park in what’s little more than a housing development in Santa Ursula. She is quite magical and not many people even know she exists.

It’s one of the wonderful things about Tenerife, there are surprises big and small to be found in the most unlikely of places.